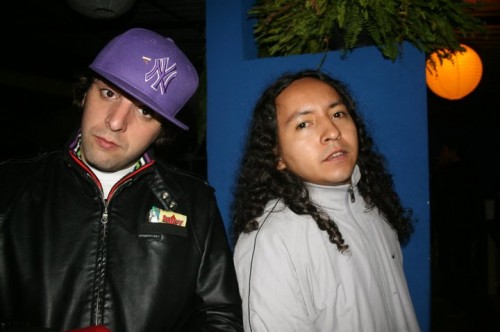 It’s late July and summer’s hitting with a vengeance. It’s hot, it’s sticky, and some days the last thing you want to do is move. Well, today’s featured band will get you off your ass no matter what the thermostat reads. It’s Mexican salsa-dance cover duo Tropikal Forever, who bring a wild south-of-the-border sound perfect for embracing the sweatiest side of the season.

The duo dances through dozens of classic rock and pop covers, never at any speed less than full throttle. We emailed singer/keyboardist Alvaro Lamadrid Isoard to find out how the duo comes up with their Latin dance reinventions. “We don’t want anything but have fun!” he writes. “We try to make our shows a complete experience, mixing elements from cool sources such as the greatest songs of all time, by our favourite bands. We mix them with regional latin styles, add a pinch of rock n’ roll, and completely new lyrics, make them funny and integrate elements of modern-day mexican culture, such the typical mexican wedding cover band show.”

Some songs they choose come ready for dancing, but their best tunes turn decidedly non-dance sources into hot rave-ups. Their version of Metallica’s “Enter Sandman,” for instance, throws the listener off by recreating the intro rather faithfully. Then with one “Ow!” yelp, it’s salsa fever time. On Nirvana’s “Smells Like Teen Spirit,” they throw in wailing mariachi horns in one long blast of sound. All the music is played by a live band, adding an anything-goes energy you can’t get from Garageband.

They even translate the lyrics into Spanish. Well, “translate” may not be quite the word. “Here in Mexico most people don’t really know the lyrics to these anthems,” Isoard writes, “so they simply “washenwer” them…(a slang term for the way people say some syllables that in their minds sound just like the lyrics, but really don’t mean a thing).” Tropikal Forever twists that tradition, fitting in similar-sounding Spanish words in place of the English.

Is all this a gimmick in the Latin-Dance Tribute to… sense? Sort of, but it’s also a whole lot of fun. Kick your summer into high gear with five of our favorite Tropikal Forever covers below. Then, download many more at their Soundcloud or Archive.org pages.

Check out more Tropikal Forever at their website. Warning: May be NSFW, depending on how your office views thong-clad bikini butts.