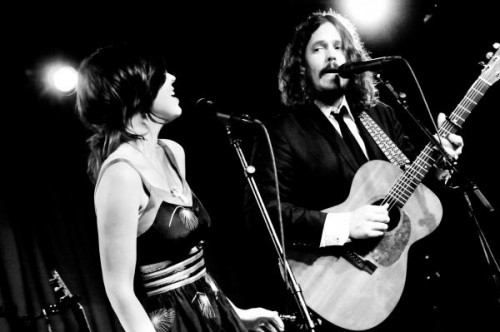 The late Elliott Smith’s catalog is full of moody, mellow indie-folk gems that have proven ripe for covering, with other notable acoustic-leaning musicians like Ben Folds, Seth Avett and many more offering up their own takes on his songs. Given the popularity of Smith covers and their own penchant for re-interpreting established works, it’s little surprise that up-and-coming folk duo The Civil Wars decided to record a cover of one of his best songs, “Between the Bars” from his 1997 album Either/Or (Full Album set here).

Recorded by Liveset in preparation for a live concert stream, “Between the Bars” shows off the musical chemistry between Joy Williams and John Paul White, whose harmonies are both strikingly beautiful and reminiscent of the double-tracked vocals that Smith used on his recording of the song. White’s simple guitar picking in 3/4 time gives the song a delicate feel and keeps the spotlight on the vocals and lyrics where it belongs. The video is also gorgeously-shot, with intimate close-ups and an interesting use of focus throughout. Watch it below and also be sure to check out our recent feature on The Civil Wars for some of their other fantastic covers.

The Civil Wars – Between the Bars

Check out more from The Civil Wars on their Myspace.