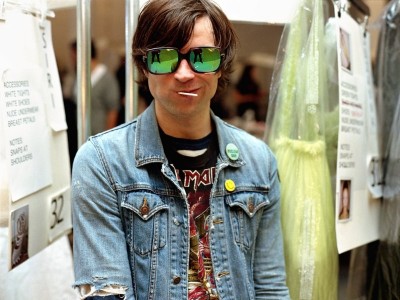 After a (very brief) break from music last year, multi-talented singer/songwriter Ryan Adams is returning to the spotlight in a big way, announcing a new album and a European tour. Always prolific, Adams followed up his announcements with a pair of DIY covers this week. On Facebook, he posted back-to-back acoustic versions “Mansard Roof” and “Oxford Comma,” the first two tracks from Vampire Weekend‘s debut album. Adams introduced “Mansard Roof” as “track one,” which has many fans speculating that these videos could be the first installments of a longer series.

If there are more covers in the works, this first pair is a glimpse of promising things to come. Armed with only a webcam and a guitar, Adams transforms Vampire Weekend’s cheerful Afro-beat singles into introspective acoustic pieces, complimented by the dimly lit videos. “Mansard Roof” is particularly great, centered around a delicate interlude of guitar. The tracks are a dramatic, at times near-unrecognizable departure from the sunny vibe of Vampire Weekend’s music, more suited for a quiet summer night than a beach party. The two covers, which you can watch below, should have fans of both Adams and Vampire Weekend excited by the potential for more in this series.

Check out more from Ryan Adams at his website or Myspace.