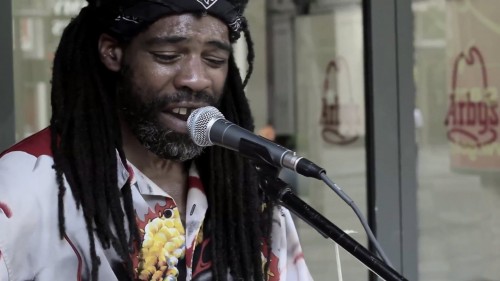 In a display of the power of the Internet, a homeless Denver musician has earned hundreds of thousands of views for his new cover of Prince and The Revolution’s “Purple Rain.” Dred Scott, assisted by musician, producer, and cover artist Tyler Ward, recorded the cover for a seven-song acoustic EP Live From 16th Street Mall. Ward tells the story:

It was a late friday evening in Denver when I heard Mr. Dred Scott playing music from a street corner. After chatting with Dred and hearing his story, I asked if I could feature him on my channel. He didn’t understand the concept, but he agreed to it anyway. A few days later, we found him on 16th Street Mall in downtown Denver where we proceeded to record him live. We came up with a 7 song EP and decided that itunes sales would help out our new friend. We won’t be paying him in cash, but we will be using it to provide food, clothing and more as long as the tracks keep selling.

Check out the sweet acoustic guitar version of “Purple Rain” in the video filmed during the recording session on 16th Street Mall in Denver, CO. Make sure to head over to iTunes to buy the EP and support Dred Scott.

Check out more of Tyler Wards’s projects on Facebook.