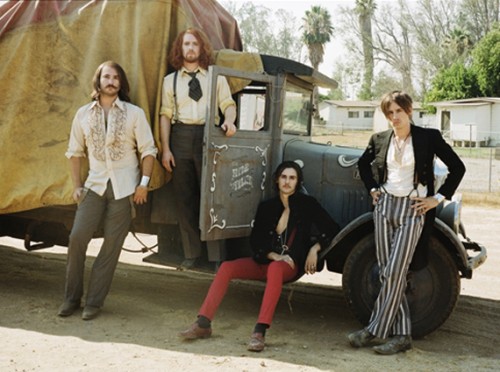 Being raised in a Hollywood family as the great-nephew of actor Art Carney, Reeve Carney would naturally gravitate towards the stage. Indeed, for years he found his home on the concert stage as frontman for his band, Carney. His fame, though, came on a different stage altogether. When not performing with Carney the band, Carney the person stars as Peter Parker in the Broadway production of Spider-Man: Turn Off the Dark.

As part of the show, the rest of the band gets to perform as part of the pit orchestra playing music composed by U2’s Bono and The Edge. This past Monday evening, while the show was dark, Carney (the band) performed at New York’s Bowery Ballroom. During the show, Reeve mentioned how he discovered “Bohemian Rhapsody” by Queen when he was eight years old and watching Wayne’s World. Watch the video from Bowery Ballroom below as Carney plays “Bohemian Rhapsody” into The Beatles’ “I Want You (She’s So Heavy).” (via According to G)

For more info on Carney check out their website.

One Response to “Carney Performs Queen/Beatles Medley in NYC”