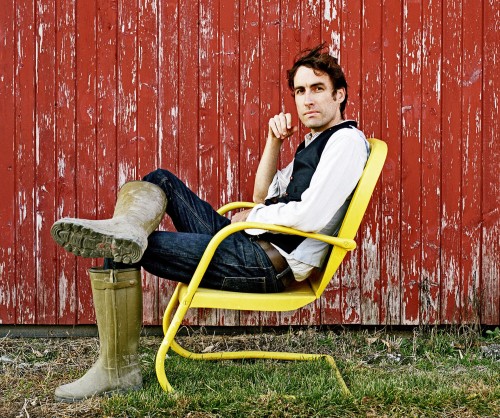 The latest cover off the Muppets’ Green Album tribute features whistling and violin, so it can only come from one man: Andrew Bird, a man renowned for both those skills. He premiered his cover of Kermit the Frog’s classic lament “Bein’ Green” over at NPR and has some interesting words to say about it there:

This song epitomizes Kermit’s role as the sensitive hero, the not-so-fearless leader of the Muppets. He goes from “gosh, it’s rough being green” to “well, green’s not so bad” before discovering that green is the best thing ever. But it’s Kermit, so he reins it in back to feeling pretty good about being green. The song shows us how to celebrate what makes us different, even indulge some delusions of grandeur, but in the end temper them with humility.

Kermit really owns this song, so I felt kind of funny covering it. Maybe I chose it for the challenge of taking it away from him for a moment, so we can see what a great piece of writing it is. It’s also fun to play the old jazz stuff again. As a side note, I translated the lyrics into French for performances in France and Quebec. It takes on a whole other quality in French, and really brings out the existential undertones. “When green is all there is to be / it makes you wonder / why wonder / I’m green and besides it’s all I want to be.”

Check out Andrew Bird’s “Bein’ Green” below, along with the full tracklist for The Green Album, which drops later this month. Also: Be sure to check out My Morning Jacket’s cover of “Our World” if you missed it.