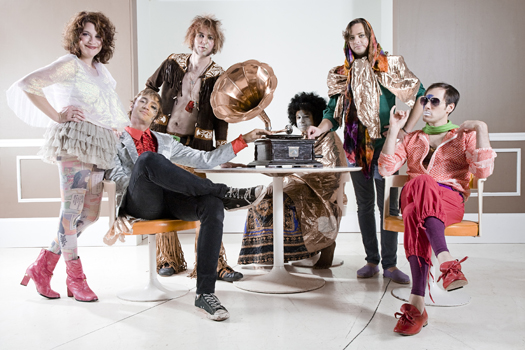 Georgia-based psychedelics Of Montreal have earned a reputation for their highly original sound and somewhat unusual behavior, so somehow it seems perfectly natural that a recent concert in Atlanta would include a geographically-appropriate cover of The Charlie Daniels Band‘s “Devil Went Down to Georgia” that includes mock pro wrestling matches between spandex covered and masked people, plenty of crowd surfing and the band’s playful, bordering on bizarre personality. Apparently the band has been on a patriotic kick, hence the star-spangled wrestler’s victory in the extra-fake wrestling part of the video.

Although the video doesn’t show what happens before the WWE pantomime, musical hints from the band suggest that this display takes place during the devil’s usual solo section. Bassist Davey Pierce picks up the lead vocals for the cover (which pick back up at 3:30 in the video for anyone without patience for onstage wrestling), bringing the song to a spot-on fiddle number from K Ishibashi and then through the outro. His voice is pleasantly fitting for the song, making the musical aspects of the cover far more traditional than the stage presentation would imply. Watch all of the shenanigans below.