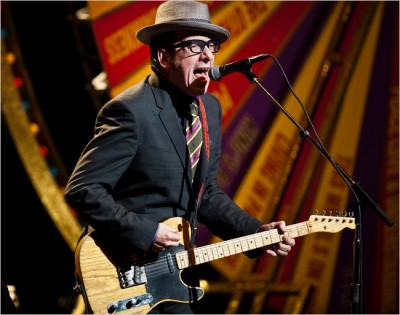 Elvis Costello is currently crossing the country on his “Spectacular Spinning Songbook” tour, in which audience members spin a giant wheel with song names and he plays the winner with the Imposters. He first debuted the concept in 1986, but this time he added a few new “jackpots,” aka. longer thematic suites. One labeled “I Can Sing a Rainbow” features a mini-set of color-themed songs: “Greenshirt,” “Red Shoes,” and a cover of Prince’s “Purple Rain.”

In New York last month, no one hit that jackpot. But whatever – Costello played the song anyway. He also covered Paul McCartney, the Rolling Stones, Bob Dylan (in honor of his 70th birthday), and the Who. Courtesy of intrepid YouTuber docinwestchester, we have excellent audience videos of all five below. Prince would not approve.

Elvis Costello and the Imposters – Substitute (The Who cover)

Check out more Elvis Costello at his website. Photo by Chad Batka.