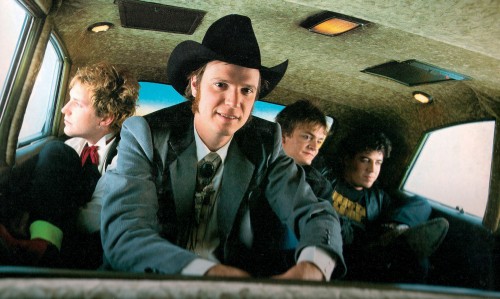 Bursting onto the scene in the early ‘80s, Jason & the Scorchers laid waste to preconceived notions of what country-rock should sound like and would influence countless bands that would follow their cowpunk/alt-country path. Though well supported by their record label (EMI), Jason & the Scorchers still struggled to find mainstream acceptance in a decade where country radio was in the doldrums and rock radio was seemingly waiting for whatever Mutt Lange would produce next. In 1983, EMI made their first and best attempt to break Jason & the Scorchers big via a video of a cover song added to their reissued EP Fervor. “Absolutely Sweet Marie” would find its way to MTV and the cult following began to broaden.

This is no band to listen to streamed through your laptop. Warner Hodges’ guitar is too loud, Perry Baggs’s drumming too furious and Jason Ringenberg’s hiccup-laden vocals too spastic to be contained by tiny speakers. Jason & the Scorchers are best enjoyed standing next to the stacks in a dive club, ears ringing from feedback and head swimming from a gut full of cheap beer. The old adage states that “it’s tempting if the only tool you have is a hammer, to treat everything as if it were a nail.” That law holds true for Jason & the Scorchers cover versions. Cowpunk is their hammer; the world is their nail. Jason & the Scorchers can take source material ranging from the Rolling Stones to John Denver and still crank out sonically similar covers. Regardless of the texture of the input, the output seldom varies.

Find some examples below. “19th Nervous Breakdown” offers an ideal Stones songs to rip through. Likewise, “Take Me Home Country Roads” practically begs for a cowpunk interpretation, and the boys oblige. The hurt expressed in the Kenny Rogers and the First Edition original of “Ruby Don’t Take Your Love To Town” is replaced by biting anger. Ringenberg and crew are in and out in two minutes flat for their cover of George Jones’ honky-tonk ‘50s hit “Why Baby Why.”

Download them below and for no additional charge enjoy a live helping of the southern favorite “Polk Salad Annie.”

Check out more at the Jason & the Scorchers website.

One Response to “Under the Radar: Jason and the Scorchers”