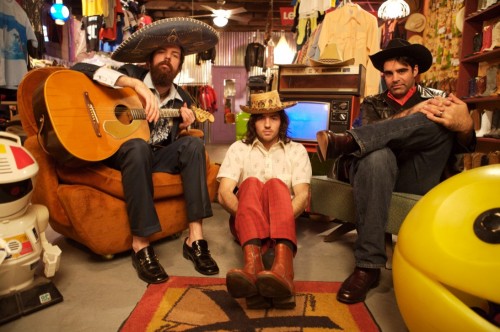 By now most of us are familiar with indie folk darlings, The Avett Brothers. Their crossover status into mainstream music over the last few years has made them accessible to the masses. But mention the name David Childers to anyone outside of the bluegrass and folk world and you’ll likely get a shrugged response, despite Childers being considered one of the great American songwriters by his peers.

The Avett Brothers consider Childers to be an influence and mentor for their work, with his songs weaving old-timey tales of the everyman. Unfortunately, the life of a struggling musician took its toll on Childers and he retired from performing in 2007. The group befriended Childers and they have since worked on various side projects with him individually, as well as covering his songs as a group.

The video below shows the group tackling Childers’ “The Prettiest Thing,” a song he wrote and sang at his last show before bowing out in 2007. The Avett Brothers, seen here with occasional touring member Joe Kwon on cello, are clearly at home with his music and words. Their performance below is an intimate one and it highlights why they have become so popular. The first lines draw you in like an old friend telling a story: “It was New Year’s Day at the Seaside Bar. There was a special on PBR.” So sit down, pop open a can, and enjoy. (via Crackerfarm)

Check out more from The Avett Brother on their website