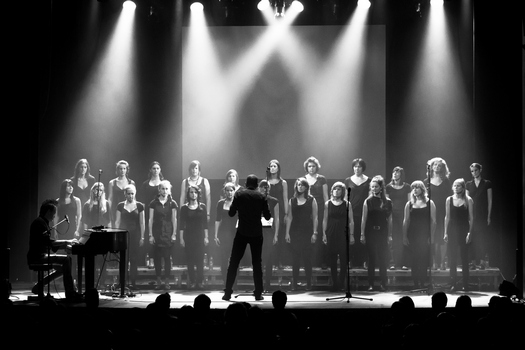 Belgian women’s choir and cover celebs Scala and Kolacny Brothers dropped an excellent self-titled album earlier this year and now they’ve released a music video for one of the album’s standout tracks, their take on the Foo Fighters’ acoustic gem “Everlong.” The group has been gaining attention since their cover of Radiohead’s “Creep” was featured in the trailer and on the soundtrack of The Social Network, and they’ve enlisted the talents of Mark Woollen, the producer of that very trailer, to direct the music video.

Even without the video, the choral arrangement of this song is absolutely breathtaking. Steven Kolacny’s dark and dramatic piano accompaniment plays beautifully with the choir’s delicate textures, and Woollen’s video does a tremendous job of conveying the emotions and feel of the song. The musical presentation and Dave Grohl’s lyrics are both saturated with a sense of intimacy, which the video reflects with its muted tones and sensual images. It brings the song to life without trying to reflect the text too closely or literally, instead creating a supplemental work of art that reflects the song’s simple and elegant beauty. Some might consider the accompanying clip a tiny bit NSFW, but it stays tasteful and classy throughout. Watch the video below, and visit the source link for an explanation by the video’s director.

Watch it over at NPR Music.

Check out more from Scala and Kolacny Brothers at their website.