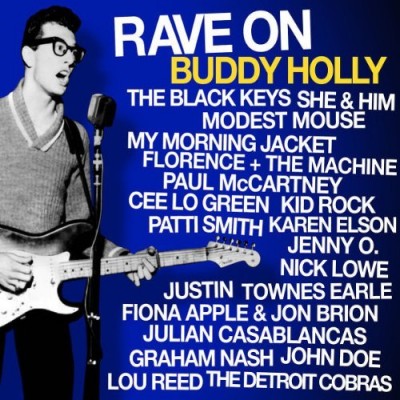 Choosing standouts from such a varied and high-profile set of covers is a challenge. Some of the best moments come from contributors who chose to keep their covers low-key. Dan Auerbach’s vocals gracefully carry the Black Keys‘ quiet, percussion-based opener “Dearest,” while Fiona Apple and Jon Brion trip through a pitch-perfect duet in “Everyday.” My Morning Jacket offers the elegantly subdued “True Love Ways,” embellished with a lovely string section.

On the opposite end of the spectrum, artists like Florence + the Machine and Paul McCartney make riskier choices. McCartney adds a raspy punch to the sugary lyrics of “It’s So Easy,” while Florence infuses “Not Fade Away” with industrial New Orleans blues in one of the album’s strongest tracks. Cee-Lo Green crops up for a rapid, toe-tapping cover of “(You’re So Square) Baby I Don’t Care” that proves an interesting departure from his usual style. Kid Rock, of all people, also stands out with a version of “Well All Right” that takes an unexpected turn with an infusion of horns and shows how much he’s matured as an artist.

The album does a great job mixing established artists with indie standouts without any jarring disconnects from one track to the next. Witness Jenny O.‘s bouncy, Dolly Parton-inspired “I’m Gonna Love You Too” rubbing elbows with a characteristically distorted version of “Peggy Sue” from Lou Reed, and Modest Mouse‘s country-tinted “That’ll Be the Day” mingling with John Doe‘s monotonous take on “Peggy Sue Got Married.” It’s a testament to the quality and influence of Holly’s music that these diverse musicians all find something in his catalog that meshes with their own styles.

Though it’s a remarkable collection overall, Rave On falters in a few places. She & Him‘s poppy “Oh Boy!” is a pleasant listen but doesn’t add much to Holly’s original, while Karen Elson‘s vocals on “Crying, Waiting, Hoping” fail to impress, despite the presence of ex-husband Jack White. Julian Casablancas might have been better served by teaming up with the Strokes instead of restructuring “Rave On” with synths, though he does get points for originality.

At nineteen tracks, Rave On Buddy Holly likely has something for everyone, from blues enthusiasts to electronica fans. Such a long album often suggests the presence of filler tracks, but you find surprisingly few here. Almost every artist works to produce a unique reimagination of Holly’s music. Rave On is not only one of the most hyped cover albums of the year – it’s one of the best.