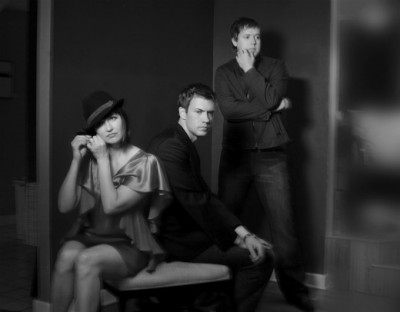 English rock band The Cure , as well known for their ’80s hits like “Just Like Heaven” and “Love Song” as for lead singer Robert Smith’s “goth” style and lovelorn lyrics, are a band that we return to time and time again. Everyone from The Watson Twins (with their folk cover of “Just Like Heaven”) to Guster (who covered “Boys Don’t Cry” in their 2010 Live Collection) to Anberlin (who released a piano infused cover of “Love Song”) have taken on Smith and Co’s songs and tried to master the mixture of heartbreak and gloom that the 80s band is known for.

Denver-based electronic trio Ping Trace has released a cover of The Cure’s 1980 single “A Forest” off of their second album Seventeen Seconds. The song, which was most famously covered by both Bat For Lashes on their 2009 “Daniel” 7” and Nouvelle Vague is an early example of the eerie style that Smith and his band mastered throughout the years. Ping Trace kept the haunting quality of the original alive, but completely made the cover their own, choosing to bend and mold it into a house music cover that is at once spooky and groove-worthy.

Find out more info about Ping Trace on their website.