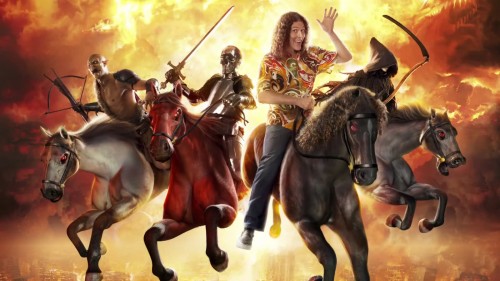 No question, music-comedy pioneer “Weird Al” Yankovic is known for his parodies and, to a lesser extent, his original musical numbers. But he performs a third, perhaps underappreciated, category of song: the cover. Every album includes a “polka” medley which, though not labeled as such, fits the dictionary definition of a cover: same lyrics, different music. His latest, Alpocalypse, includes another instant classic: Polka Face.

You may remember, we first heard “Polka Face” almost a year ago in its live incarnation. With pop culture moving at Internet speed, a year later does feel a little…dated. Honestly, how many hits has Ke$ha had since “Tik Tok”? Ten? Twenty? Still, no one does a pop culture genre-mash like Al. The song content may not have changed since last year (see full tracklist below), but hearing the cover in this fully fleshed-out form is a treat. It adds horns, snapping, and duck sound effects. Check it out below. (via Exclaim)

“Polka Face” Song List:
“Liechtensteiner Polka” by Will Glahé
“Poker Face” by Lady Gaga
“Womanizer” by Britney Spears
“Right Round” by Flo Rida
“Day ‘n’ Nite” by Kid Cudi
“Need You Now” by Lady Antebellum
“Baby” by Justin Bieber
“So What” by Pink
“I Kissed A Girl” by Katy Perry
“Fireflies” by Owl City
“Blame It” by Jamie Foxx
“Replay” by Iyaz
“Down” by Jay Sean
“Break Your Heart” by Taio Cruz
“The Tick Tock Polka” by Frankie Yankovic
“Tik Tok” by Ke$ha
“Poker Face (Reprise)” by Lady Gaga
“Whatever’s Left Over Polka” by “Weird Al” Yankovic