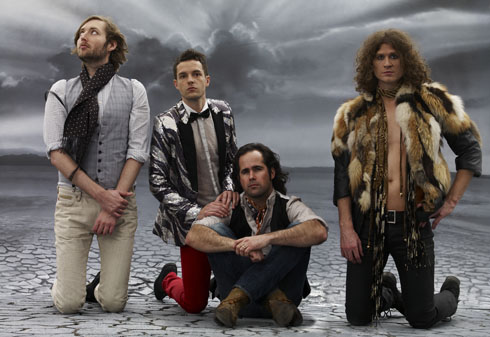 Recently, the Killers drummer Ronnie Vannucci hinted that the band’s hiatus may soon come to an end. The Vegas foursome hasn’t released an album since 2008’s Day & Age, though Vannucci and hardworking frontman Brandon Flowers have kept busy with solo projects. Day & Age was preceded by the 2007 b-sides disc Sawdust, where The Killers revealed their fondness for covers. Flowers and Co. favor older inspiration, having covered everyone from The Beatles (“Helter Skelter”) to David Bowie (“Moonage Daydream”), the Eagles (“Hotel California”) to Frankie Valli (“Can’t Take My Eyes Off of You”). Here are five of their best covers, four tackling songs by earlier generations and one from an unexpected peer.

Very few covers from the Killers take on current artists, but their best cover is of “Four Winds,” a track from Bright Eyes album Cassadaga. It’s strange source material for the Killers, and the cover on this list that makes the greatest transformation to the original track. They obliterate Cassadaga’s bluegrass-tinged country in favor of the broad synth sweeps of Day & Age. “Four Winds” is perhaps the strongest cover showing from the Killers, with such a complete genre shift that it sounds like one of their originals.

Sawdust featured several covers, including an old-fashioned, country-tinged take on Kenny Rogers’ “Ruby, Don’t Take Your Love to Town.” It was an unusual, rather kitschy choice on Sawdust, the follow-up disc for the grandiose rock of Sam’s Town. However, the Rogers cover foreshadowed the musical evolution Flowers showed with his debut solo effort, Flamingo. In “Ruby,” his southwestern twang emerges more strongly, taking the place of the faux-British accent he adopted for Hot Fuss. He also took some inspiration from Rogers’ hard-luck narrative for Flamingo tracks like “The Clock Was Tickin’.”

The Killers teamed up with photographer Anton Corbjin, their collaborator for the “All These Things That I’ve Done” video and Sam’s Town promo photography, to cover Joy Division’s “Shadowplay.” Corbjin asked them to record the track for his Ian Curtis biopic Control. No Joy Division song is ever quite the same without Curtis’ distinctive droning voice, but the Killers spice up their cover with a creepy keyboard line, and Flowers’ flair for dramatic delivery takes the vocals to a different place. Since its 2007 release, the cover has been a staple in their live sets.

In 2009, the Killers visited London’s Abbey Road for an acoustic set. They included an extremely low-key cover of Dire Straits’ “Romeo and Juliet” in their lineup. Acoustic tracks are rare in the stadium-ready Killers repertoire, but the band handles the smaller scale gracefully. The only flaw in the cover is that Flowers was obviously sick during the recording session; his vocals are more raspy and restrained than usual.

Brandon Flowers is a longtime Morrissey fan, so it’s no surprise that one of the Killers’ earliest covers was of Moz’s “Why Don’t You Find Out for Yourself.” The track is a snapshot of the early Killers sound, with Flowers’ subdued, jaded vocals taking center stage. The band hadn’t yet adopted the glamorous sound that characterizes their later albums, and the sparse production and flat cynicism of Flowers’ performance are good fits for Morrissey’s original.

For more from The Killers, check out their website.