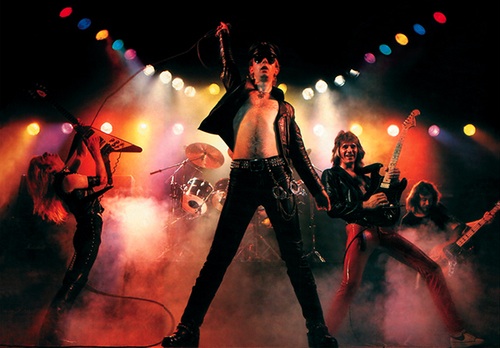 Of all the heavy metal bands that came to prominence in the 1980s, none had more significant covers than Judas Priest. That’s especially impressive when you consider that Priest only did four of them in their entire existence (that statistic includes live shows). Clearly, they’re not a band to toss off random covers on a whim. Yet all but one of their tributes ended up providing defining moments for their career.

When Judas Priest first formed in 1969, no one could have guessed that they’d still be active 42 years later, or that they’d end up becoming pioneers of an entire genre of music. From the very beginning, they’ve been influenced by the work of other artists in surprising ways, even taking their name from the Bob Dylan song “The Ballad of Frankie Lee and Judas Priest.” Below, we take a look at some of the ways that covers have shaped the career of these “Metal Gods.”

MP3: Judas Priest – Diamonds and Rust (Joan Baez cover)
Besides the band’s name, this early cover provides the only real proof of Priest’s folk influence. It was included as the second track of 1977’s Sin After Sin at the insistence of the band’s producer, who argued that it fit the mood of their record. Joan Baez’s “Diamonds and Rust” became an early indicator of the band’s power to merge heavy metal with melody, something they’d exploit to great effect in the ’80s. “Diamonds and Rust” remained a concert staple for years; in fact, a roaring live version from Unleashed in the East was included on some greatest hits records. Later performances found the band stripping the song down to a couple acoustic guitars and a voice, reconnecting the song with its Baez roots, but where Priest history is concerned the key version will always be the heavier one.

MP3: Judas Priest – The Green Manalishi (With the Two-Pronged Crown) (Fleetwood Mac cover)
Two records later, on 1978’s Killing Machine (later retitled Hell Bent for Leather for U.S. release) Priest pulled out another cross-genre cover with this Fleetwood Mac oddity from the tail end of the psychedelic Peter Green years. Leather showed the beginning of Priest’s transition into a more commercial sound, and “Manalishi” embodies that transformation perfectly. The opening lead guitar line provides an unforgettable hook, made all the more memorable when singer Rob Halford intones the hook himself at the song’s close. “Manalishi” gave Priest an early live “singalong” (audiences could croon the hook back to Rob) and a greatest hits mainstay.

MP3: Judas Priest – Johnny B. Goode (Chuck Berry cover)
This Chuck Berry classic is the only cover in Priest’s career that really has no consequence. It comes from the 1988 Anthony Michael Hall film Johnny Be Good and was released later that year on Priest’s Ram it Down, a relatively disappointing record that aimed to ape more synth-driven popular metal. Indeed, their rendition of “Johnny” sounds very glam rock, with polished drums and a fist-pumping breakdown. We need to remember this song about as much as we need to remember the movie from whence it hails.

MP3: Judas Priest – Better By You, Better Than Me (Spooky Tooth cover)
We can contrast “Johnny” with what might be called the most important song of Priest’s career, at least from the standpoint of public perception. In 1990, 12 years after the release of this recording on Stained Class, Judas Priest became the target of a civil action lawsuit that argued subliminal messaging in this song told two teenage boys to kill themselves. Of course the case was thrown out, but it became the stuff of rock and roll legend. The great irony is that “Better By You, Better Than Me” was not written by Judas Priest. It came from the 1969 record Spooky Two from obscure English prog band Spooky Tooth. Priest therefore managed to stir up the most PR it ever received with a song they didn’t even write. Singer Rob Halford left shortly afterwards, causing the group to hire a tribute singer for their next effort in 1997. Of course, Priest eventually reunited with their powerhouse vocalist in the mid-2000s, and all was again well in the metal world.

BONUS MP3: Rob Halford – Blackout (Scorpions cover)
Though Priest often shied away from covers, Rob Halford’s solo career has no such compunctions; he even recorded an album of Christmas songs! Here’s one from Rob that shows him paying tribute to a contemporary group (a rare occurrence), Scorpions. Though none can deny that Halford’s got one of the strongest voices in rock, has he perhaps met his match at the hands of Klaus Meine?

8 Responses to “In the Spotlight: Judas Priest”