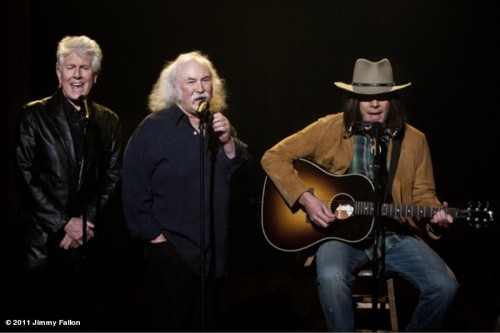 After that brilliant “Whip My Hair” with Bruce Springsteen, it was hard to know where Jimmy Fallon’s spot-on Neil Young impression could go. Going back to solo performances would seem anti-climactic, and trying to one-up that performance – well, you can’t really one-up Bruce Springsteen.

Instead, Fallon takes a third approach: performing with people who sang with the real Neil Young. Last night, guests David Crosby and Graham Nash joined Fallon’s Young on a hilarious folk cover of Miley Cyrus’s “Party in the U.S.A.” The choice seems a little dated – the song is almost two years old at this point, while “Whip My Hair” was less than a month old – but whatever. It’s still hilarious. The only next step can be Neil himself. You know it’s going to happen sooner or later. We hope it’s sooner.

Check out more Late Night with Jimmy Fallon at the show website.