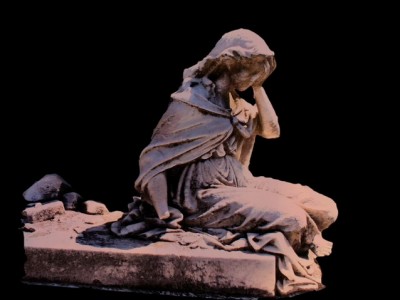 Even if you’re familiar with Tim Buckley’s psych-folk gem “Phantasmagoria in Two,” you might not have known the dictionary definition of that archaic word. Well, Maine duo Arborea clearly did. Their video for their cover embodies “phantasmagoria,” with isolated statues filmed in Philadelphia’s Laurel Hill cemetery. The slow progression of images perfectly accompanies Shanti Curran’s desolate vocals and threatening banjo, feeling very much like a “dream or fevered condition.” Only a couple times do the performers themselves appear, like supporting players to the cemetery’s lead.

Check it out below. Thanks to My Old Kentucky Blog for the tip!

Check out more Arborea at their website or MySpace.