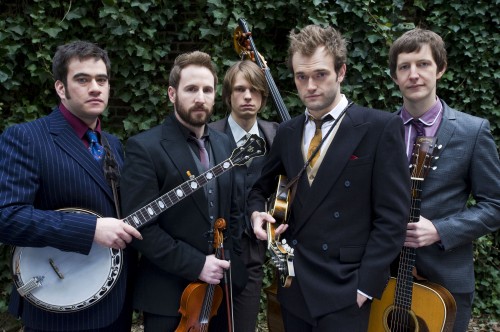 When a musical group is defined by a genre, it often boxes them in and alienates them from an expanding fan base. A certain type of music usually lends a certain type of music lover. If we were to write “bluegrass,” some may just stop reading at this point and turn up their nose. But others might see this term and immediately scroll down below to take a listen. The NYC quintet Punch Brothers is a bluegrass group for both of these types of music lovers, and for those somewhere in-between: those who aren’t really sure if bluegrass is their thing, let alone bluegrass cover songs. Trust us – it is.

Founded in 2006 by Chris Thile of the defunct Nickel Creek, Punch Brothers are a string band made up of roving musicians from around the country. Thile invited guitarist Chris Eldridge, banjo player Noam Pikelny, violinist Gabe Witcher and bassist Paul Kowert to put their roots down and settle in New York. Once they had a chance to establish a home base, the guys gained a following with their informal live shows peppered with cover songs one might not expect to hear with mandolin and banjo. In fact, other terms have sprung up to try and define their sound: “newgrass,” “modern bluegrass,” and “grassrock” are just a few.

Whatever fill-in-the-blank term you’d like to use for the Punch Brothers, it’s hard to dispute their skill in turning songs such as Radiohead’s “Packt Like Sardines in a Crushd Tin Box” into a violin and banjo arrangement that recreates the original’s electronic noise using only live instruments. This is not your great granddad’s bluegrass. Their undisputed musicianship appeals to traditional bluegrass fans, but their cross-genre cover choices gain them a new following of those who might otherwise pass, and they do so largely only by word-of-mouth from their live shows.

Below, we feature some of these live show covers, “Packt” included, and highlight the Punch Brothers’ range of talent. On Wilco’s “Poor Places,” they add country-folk warmth to the original’s melancholy. On Josh Ritter’s “Another New World,” Thile sings a story that is both sad and sweet, backed by a haunting banjo refrain. Their version is a perfect example of what bluegrass can do for indie music. But make no mistake – the Punch Brothers can also start a ruckus guaranteed to shake the dust off those rocking chairs. On The White Stripes’ “Dead Leaves and the Dirty Ground,” the guys replace the Stripes’ dirty rock sound with pure old-timey string band goodness to show off their instrumental prowess.

The final selection is Of Montreal’s “Gronlandic Edit,” perhaps one of the least likely songs to get the newgrass treatment, which is likely why the crowd at this live show responds so favorably. Thile’s mandolin licks are just as groovy as the original electropop beat, and they prove bluegrass can be far more modern than what we may be accustomed to. After all, no one likes to be put in a box, and Punch Brothers are breaking free.

4 Responses to “Under the Radar: Punch Brothers”