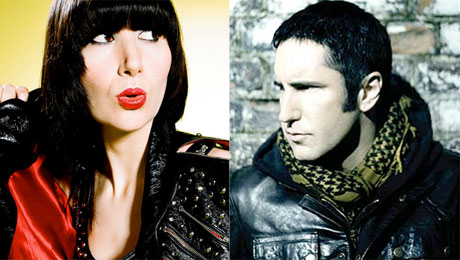 Trent Reznor’s collaboration with Atticus Ross for David Fincher’s The Social Network score landed him both an Oscar and a Golden Globe. For Fincher’s next project, the reboot of The Girl With The Dragon Tattoo trilogy, the duo teamed up with Karen O of the Yeah Yeah Yeahs for a cover of Led Zeppelin‘s “Immigrant Song.” The result? A goosebump-inducing, adrenaline rush of a cover that makes the film’s December release seem all too far away.

Karen O’s howl combined with Reznor’s raw electro-industrial sound amps it up and fits brilliantly with the trailer for the film. Advertised as “The Feel Bad Film of Christmas,” this cover does the story justice, which creeps into very dark territory. Right in his comfort zone, Reznor takes the original cry of invasion and somehow makes it more aggressive for the better.

Check out the trailer with a 90-second clip of the cover below. Are you excited for the Feel Bad Film Score of Christmas?

‘The Girl with the Dragon Tattoo’ comes out this December.