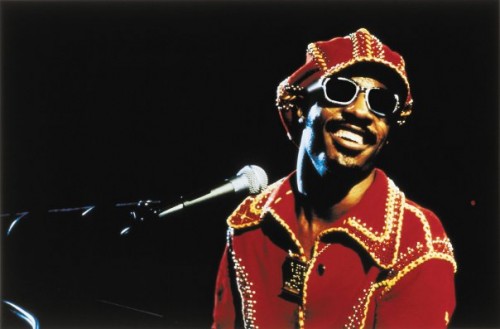 It’s hard to invent new praise for Stevie Wonder, but because today is his birthday I must rise to the occasion. The high priest of soul turns 61. That means it’s been exactly fifty years since Stevie Wonder first signed with Motown Records at age 11 and began to amass his more than 30 top ten US hits and 22 Grammy awards. As the ultimate luminary of soul music, Wonder’s influence has pervaded nearly every other genre. He is one of those few artists where anyone claiming he’s overrated is only embarrassing himself. This puts him on the same level as Dylan, the Stones, and the Beatles, and above iconic but more disputable artists like Aerosmith, Prince, and Madonna.

Given Mr. Wonder’s likability it comes as no surprise that almost everyone under the sun has covered his songs. Various artists have taken on love songs like “Ribbon in the Sky,” sanguine uppers like “Sir Duke,” and sharp toothed, jaunty numbers like “Superstitious.” Some have hit (think Red Hot Chili Peppers version of “Higher Ground”) while others have missed, but all are a testament to the irresistible charm at the core of every Stevie Wonder song. So Mr. Wonder, in an attempt to say thank you for giving all of us the gift of music time and time again, here are five covers, both well-known and lesser-known, that do justice to your genius.

Jennifer O’Connor – A Place in the Sun (Stevie Wonder cover)

If you haven’t heard of Jennifer O’Connor, then run right now and get your hands on her album Here With Me. Acoustic takes often build reflective moods and O’Connor’s version of “A Place in the Sun” is no exception. While both versions promise the listener that good times are bound to follow hard times, O’Connor’s version sounds a little less convinced. If Wonder’s, Motown-molded, full band version is winsome and enthusiastic, then O’Connor’s breathy and bare version is its cautiously optimistic counterpart.

Livingston Taylor is often eclipsed by his better-known brother James. His music has evaded the spotlight for years but his triumphs can be measured in other ways. For instance, he currently teaches stage performance at Berklee College of Music and previously took on the role of Harvard’s artist-in-residence; two accomplishments that not every little brother could achieve. In a vein that reflects his career, Livingston takes an academic approach to “Isn’t She Lovely” and crafts a very skilled version of the track. The whistling is precise and delicate, the guitar picking sounds studied, and even Livingston’s little breaths seem perfectly timed.

George Michael – You and I (Stevie Wonder cover)

Love him or loathe him, George Micheal has the vocal goods to pull off this type of homage. Michaels, who has the unfortunate habit of peppering every cover song he does with synthesizers and wind chimes, does better with this cover precisely because he avoids the overproduction pitfalls. By picking one of Wonder’s sweeping ballads, Micheal stays within his bailiwick and delivers a quality cover that features traditional piano, elevator-synth not included.

Rock and Roll’s favorite softie Art Garfunkel took on Stevie Wonder’s “I Believe (When I Fall in Love It Will Be Forever)” on 1975’s Breakaway. The album didn’t make many waves but this is a cover worth noting. Garfunkel wisely decided against trying to emulate Stevie and instead shrouded the song in his famed tenor voice and layers of folk instrumentation, both of which help make this epic testimony to everlasting love a little more precious and tender.

In 2008, The Lost Fingers somehow managed to bring both gyspy jazz and Quebec back into the world of music relevance. Their debut covers album Lost in the 80s went platinum and the hits on the “Gyspy Jazz” Wikipedia page doubled. With their version of “Part-Time Lover,” The Lost Fingers use rhythm guitar and a capella like vocal techniques to recreate the bounce featured in Wonder’s most curious #1 hit.