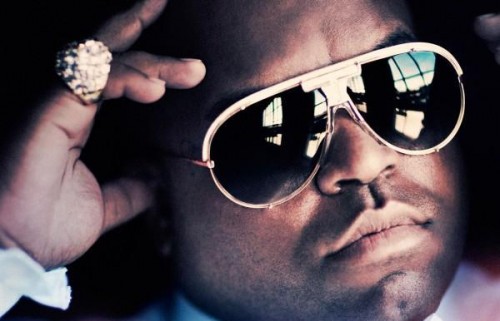 Cee-Lo Green turns 37 today, and he has every reason to celebrate. The Atlanta-born singer, rapper, and producer has been everywhere the past year: taking over the radio with his ridiculously catchy single “Fuck You,” performing at the Grammys with a psychedelic peacock costume and backup from Gwyneth Paltrow, and, most recently, judging the hit NBC show The Voice. His birthday may fall on Memorial Day this year, but we’re not sure this guy ever takes a day off.

Countless artists, from Sara Bareilles to Pixie Lott to William Shatner have jumped aboard the Cee-Lo bandwagon with their own takes on “Fuck You” – just like what happened five years ago when Green’s Gnarls Barkley hit “Crazy” climbed the charts. In honor of his birthday, Cover Me presents alternate renditions of Cee-Lo’s two biggest hits, along with three others from his solo career and his work in Gnarls Barkley.

One of the best Cee-Lo covers comes from New England folkie Ray LaMontagne. The “Trouble” singer transforms the Gnarls Barkley hit “Crazy” with his distinctive raspy voice. LaMontagne manages to capture the power of the original with only an acoustic guitar, creating arguably the best cover on this list.

Seems like everyone who can sing (and even some people who can’t – ahem, Shatner) has released a “Fuck You” cover this year. It’s understandable; if you’ve ever sung along to it in your car, you can’t deny there’s something cathartic about belting the chorus. One of the best covers to crop up comes from London songstress Eliza Doolittle, who tones down the bombastic original for an almost-a cappella approach. With the help of two backup singers and one upright bass, she produces a simple yet effective cover. The sassy attitude she brings to the vocals is a perfect fit.

Last year, Cee-Lo skipped across a few genres to record a cover of “No One’s Gonna Love You” by indie rockers Band of Horses. In fact, we called it the Best Cover of 2010. A few months later, Band of Horses decided to return the favor with a Cee-Lo cover, choosing the track “Georgia” (that made 28th best). It’s a well-executed reciprocation, complete with a horn section that mimics the drama of the Cee-Lo original. Band of Horses and Green later teamed up to release the pair of covers as a split single.

A sunny cover of the third single from last year’s The Lady Killer comes from an unlikely source: professional ballet dancer Nick Hagelin. Atlanta-based Hagelin trades his dance gear for an acoustic guitar and produces a light rendition of the track. It’s not revolutionary and it doesn’t have a guest rap from Wiz Khalifa, but Hagelin has a good voice with a clean pop tone and a high-wattage smile – a combination that has gotten Justin Bieber pretty far.

One of the first results in a YouTube search for “Gnarls Barkley cover” is Cleveland R&B singer Durand Bernarr, whose DIY cover videos have racked up tens of thousands of views. He takes on introspective Barkley track “Who’s Gonna Save My Soul?” It’s an uncomplicated cover, showcasing Bernarr’s agile, expressive voice. The cover is reminiscent of Gnarls Barkley’s Abbey Road performance of the track.

Check out more Cee Lo Green at his website.

One Response to “They Say It’s Your Birthday: Cee-Lo Green”