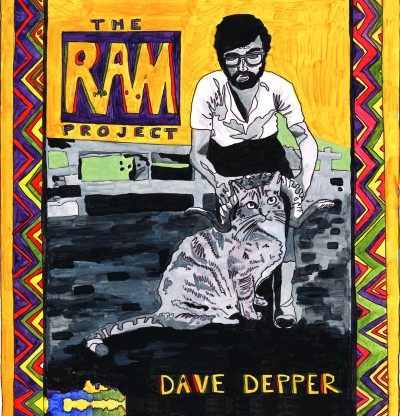 Of all The Beatles, Paul McCartney probably had the most pressure on him after the breakup of the band. John Lennon had the status of peace icon to fall back on, and no one expected much of George and Ringo (which probably explains why their early solo careers were both quite successful). His first album predictably sold well, but consisted of songs that sounded more like demos — not surprising given that he recorded it at home.

On its initial release, McCartney’s second album, a full-fledged studio affair entitled Ram, met a wall of generally unfair criticism: Jon Landau in Rolling Stone called it “monumentally irrelevant.” With time, the criticism has slowly faded, such that critics now regard it as one of his best works. Now Portland musician Dave Depper, member of numerous Portland-area bands (including Loch Lomond) and veteran of tours with bands such as The Decemberists, has recorded a cover of that entire album.

He has done so at a difficult time in his own career. Stuck in a self-described “rut,” Depper wanted to write songs of his own but found himself unable to complete enough original material to warrant a release. He embarked on the current project as an attempt to give himself a kickstart. Much like McCartney did with his first album, Depper recorded this album at home on his own. Piecing the tracks together bit by bit, he even borrowed a friend’s drum set and, lacking the microphones to record the entire kit, recorded each drum individually.

The resulting album reproduces McCartney’s original work faithfully – perhaps too faithfully. Depper’s “Too Many People,” the opening track, sounds identical to McCartney’s, at least until you hear his voice, which lacks the fullness and depth of the former Beatle’s. This pattern continues for the entire album, with guitar solos delivered note-for-note, sound effects reproduced and even running times that are essentially identical. Joan Hiller, who runs Depper’s publicity firm and the only guest on the album, even, uncannily at times, reproduces all of Linda McCartney’s semi-flat and yet charming backing vocals.

Herein lies the problem with Depper’s work: He does a fantastic job of reproducing a superb album, but what’s the point? Why not just listen to the original instead of this version? Sure, he rarely misses the mark – only “Monkberry Moon Delight” suffers because he cannot deliver the trademark McCartney barrel house vocal – but this stands more as an interesting musical exercise in recital made for private amusement than a work produced for public consumption. Ultimately, he seems no closer to his goal of getting a kickstart. Photocopying a great work hardly gets you writing, it just digs you deeper into the rut.