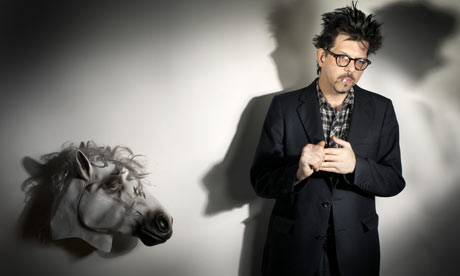 Mark Linkous was a genius. A sensitive, fragile, damaged genius who created haunting, lo-fi musical tapestries as Sparklehorse. Linkous, a Virginia Gentleman whose pop band, Dancing Hoods, was chewed up and spit out by the corporate machine in the 1980s, reinvented himself in the ‘90s. There would be four full Sparklehorse releases, and an EP, as well as a couple collaborations: one with Christian Fennesz, and last year’s Dark Night of the Soul with Danger Mouse and David Lynch. Depression, drug overdoses and legal issues would lead to an uneven timeline of Sparklehorse releases over a 15 year period. Sparklehorse is an acquired taste…a complex bottle of blended malt Scotch that has been aging in a cask for decades; its harsh bite and smoky, burning finish a barrier to the three-chord Lite Beer crowd. Linkous’s vocals have a lot to do with Sparklehorse’s sometimes inaccessibility. He doesn’t so much sing as release his breath into the path of a song – the way that one spirit might summon another in your dream. Or nightmare.

More Sparklehorse covers of Daniel Johnston exist than of any other artist, and that should probably be no surprise. Johnston just may be the patron saint of lo-fi and was an obvious influence on Linkous. Linkous produced Johnston’s 2003 album Fear Yourself, and he co-produced the ironically-titled tribute The Late Great Daniel Johnston: Discovered Covered. Johnston’s delicate and childlike songs really bloom when heard with the added depth given them in the Sparklehorse versions. In the Sparklehorse cover from the Distorted Ghost EP, Johnston’s “My Yoke Is Heavy” explodes from a one-dimensional chord organ into a rich and colorful experience that’s built on the original organ joined by a rhythm section and punctuated with bursts of electric guitar. “Go” is probably one of the most beautiful and optimistic Johnston songs; the resulting Sparklehorse/Flaming Lips version is simply gorgeous and would be at home on any mixtape you could ever give to a significant other. It’s part of the Late Great compilation.
Sparklehorse – My Yoke Is Heavy (Daniel Johnston cover)

Perhaps the best-known Sparklehorse cover is “Wish You Were Here,” the Pink Floyd ode to yet another tormented soul: Syd Barrett. It’s best-known because it’s Pink Floyd, and because Thom Yorke phones in some backing vocals. Linkous was on tour with Radiohead in 1996 when he suffered an overdose in his London hotel room and collapsed on his own legs for the better part of a day before he was discovered. He was in a wheelchair for months and although surgeries were able to save his legs, his mobility was never the same. Originally done in the mid-’90s, the “Wish You Were Here” cover found a larger audience when it was included on the 2005 Lords of Dogtown soundtrack.  This time, a plaintive piano replaces the opening guitar. Linkous’ barely audible vocals demand your attention while Yorke’s backing sounds like it could be a transmission from another dimension or from a contact made during a séance.
Sparklehorse – Wish You Were Here (Pink Floyd Cover)

“Galveston” is one of country music’s iconic songs.  Written by Jimmy Webb and taken to the top of the charts by Glenn Campbell in 1969, “Galveston” features Campbell’s signature voice and a lush arrangement.  The Sparklehorse cover is just a simple drum track accompanied by guitar, but Linkous’ vocals bring out more of the longing for home and for the girl left there than Campbell’s do. It comes from 2006’s Dreamt For Light Years In The Belly of A Mountain.
Sparklehorse – Galveston (Jimmy Webb cover)

Linkous identified with Appalachian culture and likely identified with Merle Travis’s sad ode to the coal miner, “Dark As A Dungeon.” Sparklehorse covered it for a Mojo tribute to Johnny Cash (apparently if Johnny performed a song at Folsom Prison, it became “his” to cover). The Sparklehorse version is made to sound as if it had already been played several hundred times on the dusty turntable in the corner of the company-provided shack.
Sparklehorse – Dark as a Dungeon (Merle Travis cover)

Linkous held a rifle to his heart and pulled the trigger a little more than a year ago. One wonders just how much Vic Chesnutt’s Christmas suicide just a couple months prior contributed to Linkous taking his own life. Vic and Mark were friends and collaborators, fellow Southerners who both battled chemicals and chemical imbalances. And while Linkous was limited by the lingering effects of his 1996 overdose/accident, Chesnutt had been confined to a wheelchair since a car crash at age 18. Chesnutt would contribute to Sparklehorse’s 2001 release It’s a Wonderful Life, as well as 2010’s Dark Night of the Soul. Sparklehorse would cover the title track to Chesnutt’s second album, West Of Rome, on the Chesnutt tribute Sweet Relief II – Gravity of the Situation. Linkous drenches the first verse in a drone of noisy fuzz before shifting to an acoustic guitar powerfully strummed in rhythm to lyrics delivered with seeming contempt for the character Chesnutt has created.
Sparklehorse – West of Rome (Vic Chesnutt cover)

The Sparklehorse website is here and pretty much left as it was on March 6, 2010.

One Response to “In the Spotlight: Sparklehorse”