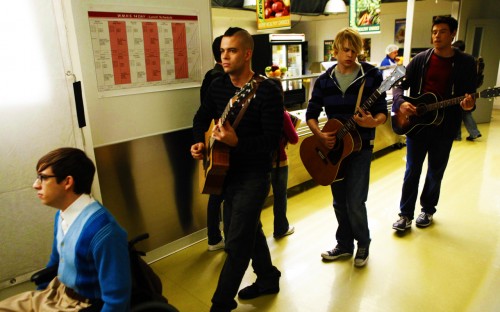 In “Rumours,” Coach Shue’s disgusted with all the mudslinging and infighting going on in his glee club, so he decides to make them learn about a pro rock group that learned to put aside their differences and create a masterpiece. That group, of course, is Fleetwood Mac, and the masterpiece the 1977 album Rumours.

Oh yeah, this is why I watch Glee.

It’s been getting harder and harder for me to defend why I continue to watch a group of melodramatic high school kids sing cheesy pop songs every Tuesday, but fortunately “Rumours” has come along. I’m fairly confident that this is the best episode the show’s produced since last year’s season-ending “Journey to Regionals.”

What does “Rumours” do right? For starters, it juggles a number of diverse stories while staying thematically on-point. It gives Will (Matthew Morrison) the only believably human story he’s had since the aforementioned “Journey to Regionals” (and what a great dilemma for him to face!). It packs a couple of unexpected emotional punches – I contend that the best Glee episodes conceal their drama in such a way that when it does become apparent, it hits you like a train (see: Quinn confronting her parents about her pregnancy in season one’s “Ballad”). And, of course, it has some great music.

It should go without saying that all of the songs in “Rumours” are top-notch; they come from one of the defining records of the 1970s. What proves more surprising, though, is that the show also delivers big time with the actual performances. I don’t think there’s a single bad tune here, and a couple stand out as downright excellent. I may be imagining this, but it even seemed as though the show toned down the overproduction and let its cast’s natural voices shine through (especially for guest star Kristin Chenoweth). Furthermore, Glee‘s use of music this week does something that even the very best episodes have a hard time accomplishing. Not only do the songs perfectly reflect Glee‘s world, but Glee in turn may shed some light on the original music it incorporates. This is a discussion for another place, but it doesn’t strike me as too far afield to conflate Rumours-era Fleetwood Mac with a gaggle of hormonal teenagers.

Though the show flirted with the idea for its “Rocky Horror” episode, “Rumours” marks the first time Glee has tributed a single album. Further, the show really embraces the record, seemingly picking songs because they fit the plot, not because they’re most popular. I was going to bemoan the lack of “The Chain,” but the episode uses the actual Fleetwood Mac track in a scene’s background! No doubt this focus helps add to the cohesiveness of the show. I imagine this episode might’ve been something of a hard sell to Fox; Rumours was released maybe 20 years before most of Glee‘s audience was born. Yet I’d consider the episode an unmitigated success, and I’d love to see Glee do more like it down the line.

Dreams (Fleetwood Mac cover)
The glee club project kicks off with this performance from Will (Morrison) and returning guest April Rhodes (Chenoweth). The two have a great vocal chemistry which was explored with last season’s surprising duet of Heart’s “Alone,” and that makes its return here. Though “Dreams” features a bit of a coupling between Stevie Nicks and Lindsey Buckingham vocally, Glee really runs with the duet idea, and in doing so produces a mighty compelling performance.
BONUS: No offense to Kristin Chenoweth, but Neko Case absolutely rules this song in an impromptu New Pornographers performance of the track.

Never Going Back Again (Fleetwood Mac cover)
“Never Going Back Again” indicates, to me, the loving care with which Glee‘s musical producers crafted this episode. Look at the way it’s shot and recorded, with that orchestra of acoustic guitars coming in as the song climaxes. Combine that with a great performance by Artie (Kevin McHale), and you have what I think is one of the season’s best tracks. I realize this may be sacrilege, but I think McHale actually handles certain parts of the song better than Buckingham. It always sounds to me like his voice hits its limits in this song’s chorus, a problem McHale doesn’t have.
BONUS: Matchbox 20 totally reworks the song on a tribute to Rumours, giving it a minor-key vibe.

Songbird (Fleetwood Mac cover)
To me, the side one-closing “Songbird” has never been a standout of Rumours, but Santana (Naya Rivera) delivers a fine, emotional performance here. I continue to think she’s one of the show’s best raw singing talents. I also like that Glee’s not afraid to pull out an album’s deep cuts.
BONUS: Deceased jazz-pop vocalist Eva Cassidy famously and touchingly covered the song during her brief career.

I Don’t Want to Know (Fleetwood Mac cover)
“I Don’t Want to Know” provides Rumours with its thematic center lyrically, much as this bouncy performance from Finn (Cory Monteith) and Quinn (Diana Agron) provides a canvas for many of the episode’s character conflicts. I don’t know if Monteith and Agron’s voices work together as well as Nicks and Buckingham’s, but they do a solid job nonetheless.
BONUS: Covers aren’t too forthcoming of this number, but check out this sisterly trio tap into heavenly harmonies on a television show audition.

Go Your Own Way (Fleetwood Mac cover)
Glee recasts the gender of the lyrics’ narrator here (that’s significant when you’re dealing with a breakup album!) and bumps the key of the song up a few steps to compensate. Rachel (Lea Michele) takes lead duties and does a great job with it, although my favorite part of the performance is how the rest of the glee club ladies join in for the chorus. This song really needs all that backing power handling the melody to let the lead vocalist add his or her own flourishes.
BONUS: From the same album as Matchbox 20’s “Never Going Back Again,” another female vocalist takes a crack at the song with less successful results – check out the Cranberries’ cover.

Don’t Stop (Fleetwood Mac cover)
The biggest pop song on Rumours provides Glee‘s showstopping number this week. I think “Don’t Stop” makes some of the best use of the show’s many singers and huge band since “Don’t Stop Believing.” In fact, when you consider how similar the titles and themes of those two songs are, I’m willing to bet these numbers get smashed together during the upcoming live Glee tour.
BONUS: Again from the tribute to Rumours, Elton John delivers “Don’t Stop” with fairly disappointing results.

Next week: It’s prom! If you thought your own prom experience was filled with drama, wait til you see how the Glee kids do it!

COMMENT GAME: “Rumours” opens Glee up to a lot of interesting possibilities. What classic or contemporary records would you like to see the show pay tribute to? Let us know below!