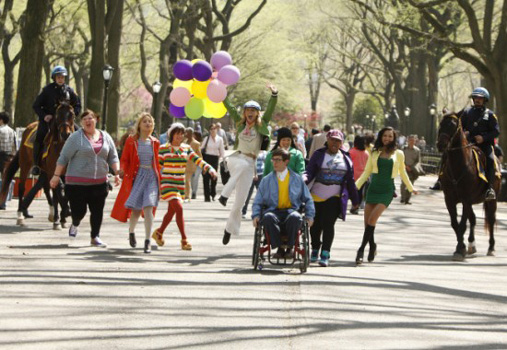 It occurs to me that there’s very little non-sports television that revolves around winning and losing. Normally, television characters just exist; though they certainly have aspirations and goals, few are the shows that spend entire seasons building to a climactic win/lose decision that alters everything that follows. Glee, honestly, is the only show I can think of that’s structured that way. For better or worse, as an audience we’re really invested in how these characters fare in competition, even though — or perhaps because — whether they win or lose sometimes seems fickle and unfair. In fact, it’s probably that notion of losing that most makes Glee resonate emotionally.

Of course I’m not going to tell you whether New Directions won Nationals last night. But if you’ve watched Glee for long you know that usually the show pulls out all the stops in these competition episodes, both dramatically and musically. Much like the earlier “Original Song,” the club here chooses to compete by writing their own material, which was okay, but isn’t really our domain. Despite that, they managed to throw in a few covers, appropriately focusing on Broadway songs. (By the way, if this post seems a little short, it is; stay tuned later in the week for a full season wrap-up.)

I Love New York / New York, New York (Madonna cover / from On the Town)
Before it closes out the season, Glee once again releases a clever mash-up, this one of a classic musical number combined with a pretty obscure Madonna track from 2005’s Confessions on a Dance Floor. I think this combo does a good job of making sparse use of the instantly recognizable “New York, New York” refrain, though some of the lyrics they’ve plucked from Madonna’s version aren’t great.
BONUS: Alright, it’s not a cover, but how many of us are familiar with “New York, New York” because of the similar Simpsons bit about their hometown?

Bella Notte (from Lady and the Tramp)
Here’s a sweet cover from a Disney classic delivered by four guys in the glee club in order to help Finn regain Rachel’s love. There’s some solid quartet harmonies going on here, and the accordion’s a really nice touch.
Glee version
BONUS: It seems appropriate to link to this violin-only cover of the song.

For Good (from Wicked)
Regular readers know I tend to come down hard on the huge amount of songs given over to Rachel (Lea Michele) and Kurt (Chris Colfer); generally I like to see the show share the wealth when it comes to lead vocals. That said, I thought this number — taken from the popular 2003 musical Wicked, staging and all — was just perfect, giving both characters a chance to live out their Broadway desires. A really, really well done cover.
BONUS: Definitely the most popular YouTube video for this song is a duet between Sam Tsui and Nick Pitera. Obviously something about their version strikes a chord with listeners.

Yeah! (Usher cover)
The press for this song credits its performers as “Female Competitive Group” — poor girls. This is the one bit of cover competition we get to see New Directions go up against. We have no idea if the judges liked this performance (since we don’t even know the choir’s name), but I did. I felt making the signature synth lines that open this song into an a cappella groove was pretty creative, and probably deserves better than being performed by a random competitor. That said, the Lil Jon “yeahs!” are a little ludicrous in this format — but then they were originally.
Glee version
BONUS: YouTube’s rife with acoustic performances of this song. Check out this cool version that employs a looping pedal to great effect.

That’s it for this season! I’ll be back in the fall, but until then check back later this week for our season two wrap-up.