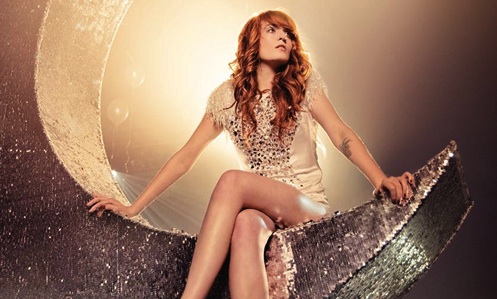 Only a month remains until the release of the much-anticipated Rave on Buddy Holly, a cover album that boasts contributions from a stunningly high-profile lineup of artists including Paul McCartney, The Black Keys, Cee-Lo Green, and Julian Casablancas. A few tracks have already surfaced and now the offering from cover enthusiasts Florence and the Machine arrives.

The press release that introduced the album last month promised “an industrial New Orleans vibe” for Florence’s “Not Fade Away.” Welch and her band make good on that promise with a host of jazz embellishments. The track kicks off with the soft thump of upright bass, then fills out with clattery percussion and a strong horn section. New Orleans jazz isn’t the most obvious choice for London-born Welch, but the arrangement offers balance as a backdrop for her characteristically dramatic vocals and creates a refreshingly fresh take on the source material. In the final stretch an electric guitar joins the mix, sending the track out in a bouncy jam session.

Florence and the Machine – Not Fade Away (Buddy Holly cover)

Hear more from Florence + the Machine at their website or Myspace.