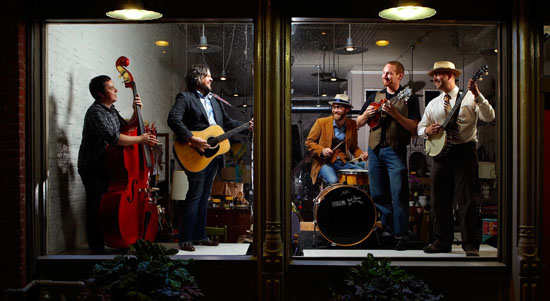 When one thinks of folk music, one might think of it purely as a genre – acoustic guitars and scratchy vocals and all that. Folk music, though, means more. Folk music is a reflection of people and their times, their beliefs and desires. “Big Rock Candy Mountain” is a true piece of American folk in this regard. Originally recorded by Harry McClintock and re-popularized by O Brother, Where Art Thou?, it’s a song of a hobo’s dreams of paradise and his journey to get there. It’s also so cheerful and saccharine, you could almost imagine an animatronic Br’er Rabbit singing it at Splash Mountain. Perhaps it should be a happy tune – it is about paradise after all – but Kansas City’s Dollar Fox has a different take on the track.

Says the band’s Tommy Donoho of their cover:

As we started working this song up, it made us realize just how sad it actually is. That the narrator of the song, who has nothing, isn’t asking for wealth, family or a home. He just wants lakes of whiskey and stew, hay to sleep on, socks that never need washing. I love the irony of jails made of tin that you can walk out of as soon as you are in. Why in the hell would you ever want a jail? At the very least wish for a land without jails. But that’s whats so interesting about the song. He doesn’t want the comforts most people desire…he simply wants to be a bum who lives a life without repercussions. Once you think about this song in that context, the minor key we put it in feels right.

The perspective, for the band, came from banjo player Ethan Taylor, whose grandfather lived as a hobo during the great depression. It was Taylor sitting around, picking at the original tune, who realized the contrast between the whistle-along cheer of the song and the hardship it represented.

Says Donoho, “when I listen to the original version, it’s the one that feels out of place.” It’s an accurate statement, and the mark of a great cover.