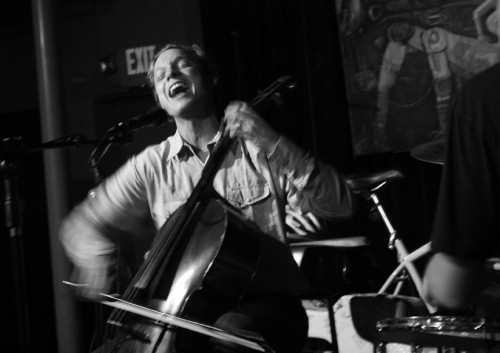 Ben Sollee, Kentucky-born songwriter and exceptionally funky cellist, has certainly been busy lately. Along with releasing his fantastic new album Inclusions this week, he found time to sit down with The Voice Project to record a cover of Joan as Police Woman’s “Real Life.” For those not familiar with The Voice Project, they’re a charity effort that has employed artists ranging from less-known Brooklyn fixtures to Peter Gabriel to make short chains of artists covering each other’s songs with the goal of attracting donations to help women in war-torn Uganda. Not only is it a great cause, but they’ve recorded some amazing and unlikely covers.

Sollee’s take on “Real Life” substitutes the original’s sauntering piano riff with his signature brand of percussive cello playing, making it more lively and energetic. His vocal style is also significantly less operatic, opting for a more sing-talking style for most of the song. His sustained bow-playing during the chorus captures just enough of the song’s emotion and dramatic effect as well, effectively walking the line between re-interpretation and faithful representation of the original composition. Check out the performance (which starts at 2:41 in the video) and a short interview with Ben about it below.

Check out more from Ben Sollee at his website.