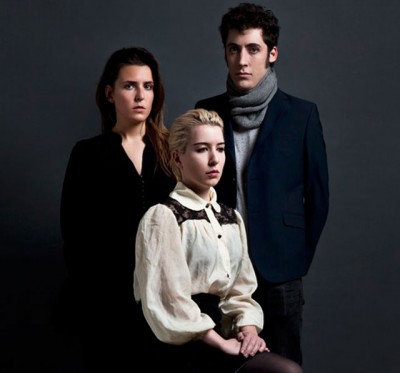 Though many people take on the great songs of Joni Mitchell (see covers by Counting Crows, James Blake, and even Phish), few capture the mixture of beauty and pain that characterizes Mitchell’s voice. Toronto indie trio Austra comes close though with their newly released cover of Mitchell’s 1969 classic “Woodstock.” The story behind the track is that Mitchell wasn’t able to attend Woodstock due to her manager telling her that it would be better for her career to appear on a TV show that day; she wrote the song based on her outside view of what happened at the festival that day, and it soon became one of her most well-known tracks and a testament to the monumental event that occurred.

The original is typical Joni – an unforgettable song that showcases her signature voice and powerful songwriting. Austra’s cover is as haunting as the original, but Austra has accomplished the hard task of making the song their own. The Canadian trio adds flourishes of synths and speeds up the tempo, evoking an eerie atmosphere, especially during the lyrics “We are stardust/we are golden/and we’ve got to get ourselves back to the garden.” The “Woodstock” cover is the B-side to their new single “Lose It.”

Check out more info about Austra on their website.