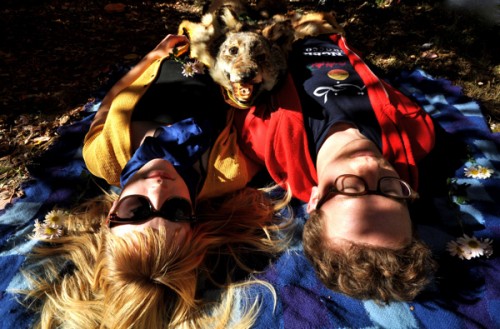 Indie artists continue their march through the list of 25 covers compiled by the A.V. Club as part of the Undercover series. The latest, and so far ballsiest, band to participate, Baltimore’s Wye Oak, took on the daunting task of performing Danzig’s “Mother.” No easy task, especially for a duo known more for ethereal indie folk than big guitar chops!

Sure, they augment their lineup with Don Godwin of Callers, but adding tenor horn hardly builds up their metal cred. They blow all negative expectations out of the water, however, with a grinding, powerful and heavy take on the song, losing none of the impact of the original despite the slower pace. Singer/guitarist Jenn Wasner, “resplendent” in a black hoodie and fake tattoos, delivers a dramatic vocal, belying her statement in the preceding interview: “of all the people who you would least expect to be metal, I think I’m…the archetype of that.” Watch the video below.