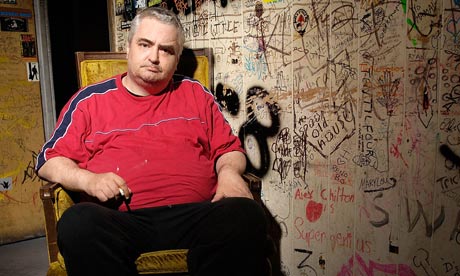 You might know Daniel Johnston from Kurt Cobain's t-shirt, his iconic mural in Austin or the many artists who have covered him.  Or it's quite possible you've never heard of him. I had the pleasure of  learning about Johnston during a panel at SXSW last month that featured his brother, manager, and others who have worked with him over the years. Emotions ran high as they discussed Johnston's eccentric artistic habits, as well as how his personality was altered by bipolar disorder and how that affected his career as an artist.

His music and art are abstract – many who listen to Johnston's work won't give it more than a minute before they write it off. The singing is off key and the guitar strumming is clumsy. But it's when you listen closely that you truly fall into Daniel Johnston's spell. Before there was the internet (there was a time – I swear), people found out about Johnston's music through word of mouth. Johnston copied cassette tapes by hand and passed them around in the Austin music scene and those lucky recipients paid it forward to other music lovers. And so began the covers of his songs, spreading his work across the country. He's been covered by the likes of Yo La Tengo, Beck, M. Ward and T.V. on the Radio.

Johnston has covers of his own too, and we're going to explore some of them today. There is heartbreaking sincerity in his cover of The Beach Boys “God Only Knows,” featured on the Do It Again: A Tribute to Pet Sounds compilation. His tambourine, echo and whine resonate to the very end. His version of Schoolhouse Rock’s “Unpack Your Adjectives” works as good, clean elementary fun. No urgency in the song, just time to relax in syntax. “Dream Lover,” a 1959 classic by Bobby Darin, became restrained with a new type of angst from Johnston in a 1983 recording.

Like the rest of us, Johnston couldn't avoid the influence of The Beatles, scribbling their lyrics into his cartoons and covering many of their songs. He took on “I Saw Her Standing There” with nothing but a piano and the blues. It's hard to believe that it was ever an upbeat song. The melancholy lyrics suddenly stand out. And he channels Paul McCartney and Wings with a lo-fi version of “Live and Let Die.” There's more honesty without all of the over-production, which is a running theme with most of his covers.

Check out more Daniel Johnston at his site.

One Response to “In the Spotlight: Daniel Johnston”