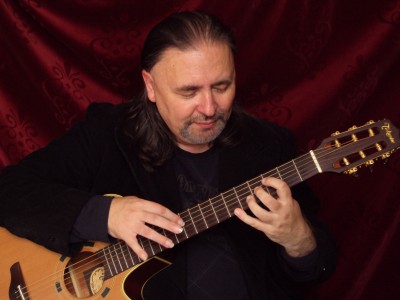 Think of two words you associate with producer-turned-chart-topper Bruno Mars. I’ll go out on a limb and assume you didn’t choose “Russian fingerpicker.” But those are the best words to describe Igor Presnyakov, the classically trained guitarist who had racked up millions of YouTube views with his instrumental covers of artists from Lady Gaga to Pink Floyd.

In his latest upload, Presnyakov takes on Bruno Mars’ ode to bad love and grievous bodily harm, “Grenade.” Mars started his career as one-third of production team The Smeezingtons, so the original track is bursting with layers of studio effects and choruses of backup singers. That makes it an unlikely choice for interpretation by a solo instrumentalist, but Presnyakov is up to the task. The track sounds, well, exactly how you’d imagine “Grenade” would sound when played entirely on acoustic guitar, but the execution is spot-on. Presnyakov’s an incredibly fast player who captures the nuances of Mars’ original, especially the build from the spare first verse to the vocal explosion of the chorus. Things take a turn for the weird when he interjects snippets of “Grenade” lyrics at random, but when he sticks to guitar his talent is unquestionable.