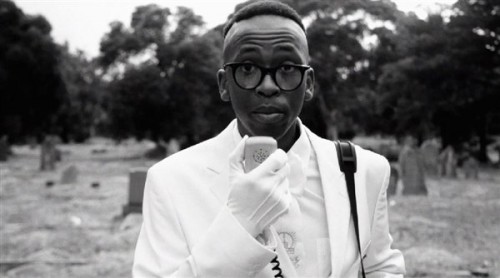 Making a massive leap across genres, South African house/funk pioneer Spoek Mathambo recently recorded a creepy, dancey, and completely original rendition of Joy Division’s “She’s Lost Control.” The track itself is awesome, but it gets even better when experienced with the atmospheric video the Soweto-born rapper and DJ released to accompany it.

Mathambo calls his style “Township Tech.” Critics have described the grungy, electro-tweaked house as “Afro-futurism” and “rave funk.” It’s hard to imagine those genres meshing with Joy Division’s gloomy post-punk, but Mathambo makes the transition seamlessly. His cover sounds like Bloc Party: in the middle of an exorcism, half darkwave and half pounding dance beats. Curtis’ trademark monotone gets swapped for Mathambo’s deep, distorted vocals. The result is equal parts gothic and club-ready.

Mathambo is also a graphic designer and illustrator, which explains why his video for “She’s Lost Control” is so stylish. The clip, a collaboration with cinematographer Michael Cleary and South African photographer Pieter Hugo, is a black and white barrage of quick cuts. It opens with a glistening caterpillar, then blinks between Mathambo dressed in a pristine white suit and gloves, rows of tilting gravestones, eerie shots of children in clumps of powdery makeup, jerky dancers and drips of thick white paint. It’s dark, undeniably weird, and as you’ll see below, really cool.

Find out more about Spoek Mathambo at his website or Myspace.