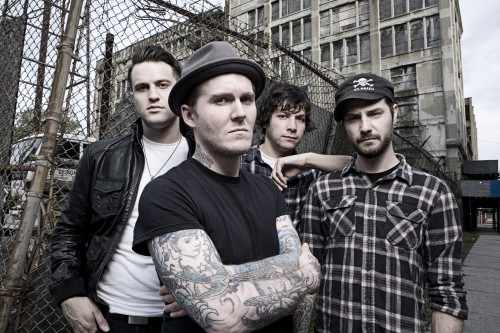 No one does classic rock covers like The Gaslight Anthem. In our In the Spotlight feature, we saw them reinvent songs by the Replacements, Tom Petty, and, big surprise, Bruce Springsteen. Their cover of Kelly Clarkson’s “I Do Not Hook Up” proved they can break out of the mold and they did so again this morning on Australia’s Triple J, covering Jack Johnson.*

As often happens for interviews, “The Gaslight Anthem” here means just lead singer Brian Fallon. Fallon admits that his bandmates mock him for his Jack Johnson fanhood. “My band, they always talk about, ‘Why do you like Jack Johnson? He was on the Curious George soundtrack.’ I’m like, ‘So, did you listen to it? It’s good! Maybe you should have a kid and mellow out one day, not be so tough and punk rock.'”

His version of “Sitting, Waiting, Wishing” indicates he may have a point. It’s less Maui surf, more Jersey boardwalk. Watch and download it below.

*He also discusses the aforementioned Kelly Clarkson cover on the show: “[The BBC] gave us a list of songs that we could do and they said, ‘You pick one.’ If you saw the list, you’d have picked that song too! Now, mind you, I like Kelly Clarkson a great deal. But to cover one of those songs would not be my first choice when I rolled out of bed in the morning.”