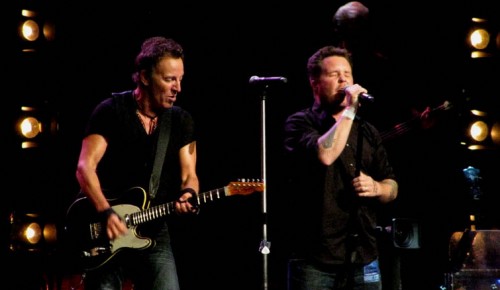 Celtic punk paragons Dropkick Murphys have spent the last month or so on the road in support of their new album Going out in Style. That title seems to sum up how they look at the American leg of their tour, as they had a pretty special surprise in wait for fans who attended their second-to-last public date in the States at Boston’s House of Blues on March 18. Not only did they use the occasion to debut live their new cover of the 1900s Broadway tune “Peg O’ My Heart,” but they brought guest singer Bruce Springsteen along to recreate the album duet for lucky fans in attendance.

Dropkick vocalist Ken Casey dedicated the song to his grandmother (appropriately named Peg), whom he told Rolling Stone is “hip enough to be [a] Bruce fan.” After a jaunty performance of the tune (watch Springsteen mess up the first chorus!), Bruce sticks around to perform his own “Badlands” as well as Dropkicks’ 2005 hit “I’m Shipping Up to Boston.” What a guy! Watch the video below for “Peg,” and while you’re at it tell us your favorite Springsteen (or Dropkick!) live collaborations in the comments below!

Check out more from Dropkick Murphys and Bruce Springsteen on their respective websites!