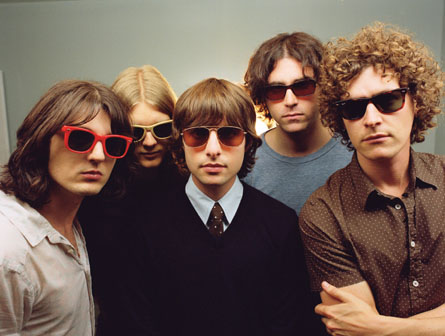 Rooney bandmembers Robert Schwartzman, Louie Stephens, Taylor Locke, Ned Brower, and Brandon Schwartzel have traveled a weary road since the release of their first album. Young and naive when first starting the professional music scene, they signed on with Geffen Records and recorded their self-titled debut in 2003. Their elation at “making it” quickly turned sour when Rooney felt pressure to make their next hit single and album. After the release of their second album, Calling The World, Rooney continued writing and recording music on their own, simultaneously trying to break free of their contract. In 2010, Rooney got their wish and signed on with Warner Music’s independent label, California Dreaming Records. They have since released their latest album, Eureka.

Perhaps as an homage to their turbulent relationship with the label, Rooney covers Del Shannon’s 1960’s California-inspired pop hit “Runaway” for Daytrotter, in a near duplicate of the original version. The real treat here is keyboardist Stephens and his fast finger work, zipping through the melody and invoking beach wanderlust. The group may still be finding their way in the industry, but their sound shows maturity. “Runaway” succintly wraps up the best parts of what make this band tick: warm and sunny surf rock that makes you smile. Pull out your flip flops and take a listen.

You can find more about Rooney at their website