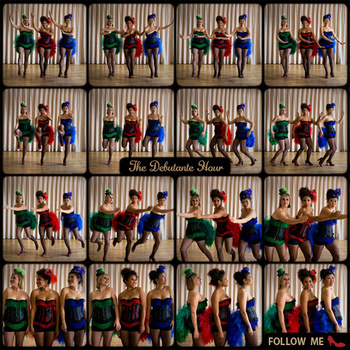 Brooklyn-based band The Debutante Hour mix vaudeville and cabaret music with a healthy dose of barbershop harmonies. For their latest release, Follow Me, they recruited Franz Nicolay, former keyboardist in The Hold Steady, to produce a set of six covers, all from different musical styles and eras. With each track, the band could easily fall flat, faced with the challenge of bending and twisting a strange blend of selections to meet their needs.

Alarm bells go off right as the album opens, with a cover of TLC’s smash hit “No Scrubs.” The band harmonizes the title to the tune of “Mr. Sandman” off the top, leading one to worry that over-the-top kitsch is the flavor of the day. The song quickly settles, however, with the soft strum of guitar and a wonderfully delivered light vocal. The spare arrangement allows the impeccable harmony to shine through, bringing us a truly inspired version of an oft-heard song. The interlude by Brooklyn rapper TK Wonder fits in seamlessly.

Tasteful and surprisingly subtle arrangement crops up throughout the album. The accordion on The Cars’ “Just What I Needed” gives the song a bit of a zydeco feel. The instrument also drives The Ronettes “Be My Baby”, a mountain many have attempted, but few have conquered. The band joins these few, reimagining the track as a street corner sing-along.

The most obscure track on the album, a cover of “Ya Ne Ta” by Ukrainian duo 5’nizza, is also the highlight. They slow the song down and soften the vocal, turning it into a soothing ode, again with harmony dominating the landscape. The only weak point in the proceeds appears in The Flaming Lips’ “Do You Realize,” with the band failing to capture the fragility and vulnerability that makes the original soar. Overall, the Debutante Hour takes a concept that few would believe could succeed and not only makes it work, but makes the songs sound like they have always belonged together.