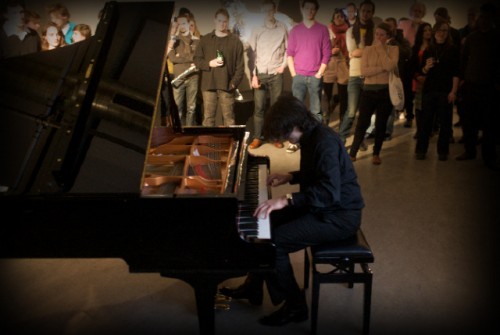 Classical music cover songs have a bad reputation. Relegated to elevator music and background noise while watching the local weather forecast, no one is really paying attention. However, classically trained French pianist Maxence Cyrin wants to change all that.

Cyrin grew up studying classical music in eastern France, but after moving to Paris at the age of 25, he was introduced to the sounds of American legends such as Elvis Presley and The Beach Boys. Cyrin soon realized that he could take his love for popular and classical music and fuse the two to form a hybrid. The result is surprisingly beautiful and highly listenable.

Luckily, it doesn’t stop there. Maxence Cyrin is listed on his tumblr site as “pianist, composer, movie editor.” After watching his music videos below, you’ll understand why. The first is “Where Is My Mind” by the Pixies, which employs scenes from 1928’s Mysterious Lady (featuring Greta Garbo). Next is “Around the World” by Daft Punk, featuring 1930s movie clips from choreographer Busby Berkeley. Last is a cover of Arcade Fire’s “No Cars Go,” set to clips from 1997’s Hana-Bi. Each pairing of classical song and classic movie is stunning. Cyrin isn’t creating background music; he’s creating art.

Maxence Cyrin – Where Is My Mind (Pixies cover)

Besides YouTube, you can find more about Maxence Cyrin on his MySpace page.