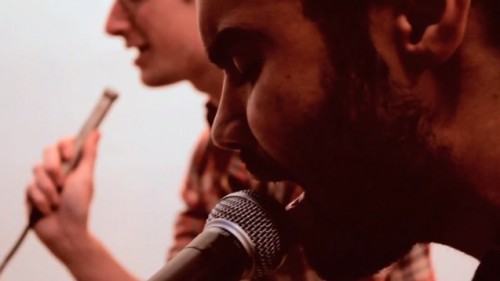 Pink Floyd‘s The Dark Side of the Moon symbolizes a bygone era in music when the album was king, record companies made money and you could only steal music by stuffing an LP under your jacket in a record store. The album spent over 14 years on the Billboard album charts and, 38 years after its release, still moves 9,000 copies on a slow week! Both The Flaming Lips and the Easy Star All-Stars have recently paid tribute by covering the record in its entirety.

Most recently, Florida’s Millionyoung and Vancouver’s Teen Daze joined forces in San Francisco on a cross-continental cover of Dark Side‘s “Us and Them.” Decked out in their best Urban Outfitters wear, they present a reverb-drenched version that sounds even more dreamy and psychedelic than the original. No small feat! Check out the video below. (via Yours Tru.ly)

Millionyoung and Teen Daze – Use and Them (Pink Floyd cover)

Find more Millionyoung on their website and more Teen Daze on Band Camp.