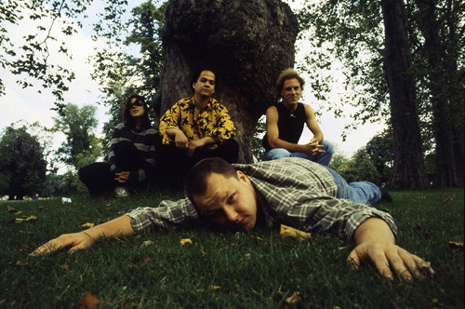 Everyone has a different favorite Pixies song. “Debaser.” “Here Comes Your Man.” “Where Is My Mind.” “Smells Like Teen Spirit.” Wait – what? Sure, technically the single listed Nirvana as the artist, but Kurt Cobain himself admitted the homage bordered on imitation. “I was basically trying to rip off the Pixies,” he told Rolling Stone. “When I heard the Pixies for the first time, I connected with that band so heavily I should have been in that band – or at least in a Pixies cover band. We used their sense of dynamics, being soft and quiet and then loud and hard.”

Well, Cobain wasn’t in that band, but Frank Black, Joey Santiago, Kim Deal, and David Lovering were (and are). Then and now, the four created music that struck emotional chords with teenagers looking for an alternative to Top 40 radio. In the midst of creating four classic albums, they’ve performed a few covers during their 20+ year career. The band tends to give songs by obvious influences very unobvious makeovers.

Black has said the White Album heavily influenced Doolittle, so starting with their cover of “Wild Honey Pie” seems appropriate. Black busts out his most throat-shredding screams on this as well as on a thundering “Ain’t That Pretty At All.” The latter features some brilliantly understated sing-speaking from Kim Deal. She delivers a more tuneful vocal on the duet “Winterlong.” The back-and-forth on “I Can’t Forget” instantly recalls “Debaser,” with a crunchy blues guitar line underpinning it all. The strangest of all, “Evil Hearted You” finds the band translating the Yardbirds lyrics into Spanish.

Check out all five below.

3 Responses to “In the Spotlight: Pixies”