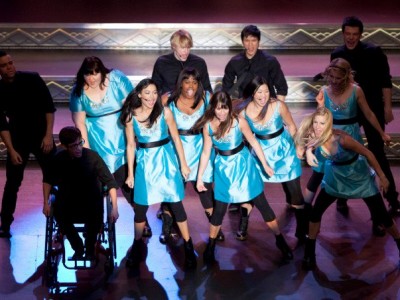 In “Original Song,” the kids from McKinely High once again compete in the regional glee club competition. Thanks to the machinations of Sue Sylvester (Jane Lynch), they discover they can’t sing their show-stopping My Chemical Romance number, and instead decide to compose and perform…wait for it…original songs. Will the glee club’s newfound creativity be enough to secure a trip to the national competition in New York City?

Last season’s regionals episode, “Journey,” provided some of Glee‘s most powerful moments to date. Bursting with anthemic music and sharp setpieces (the delivery of Quinn’s baby comes to mind), that episode reminded audiences that at its best Glee packs a lot of punch. “Journey” closed out season one, and, other than a few glimmers to the contrary, the second season’s been unable to live up to those previously established highs.

To put it bluntly, “Original Song” doesn’t possess the same strength as “Journey.” I can speculate on a number of reasons why. First, the show’s placement in the season erases a lot of the drama regarding whether or not our heroes can win regionals. “Journey” served as a season finale, while “Original Song” comes with about a month’s worth of episodes left to air, so you have to assume the glee club progresses in competition, right? Tied in with that, I suspect that for many audiences — at least for those who watch Glee — the emotional impact of winning can’t compare with that of losing. The show’s basically designed so that we see these characters lose over and over again. At least in the first season, episodes often addressed that none of its main characters wanted to be “Lima Losers” who never left town or did anything with their lives. That backdrop of hopelessness fuels the show, and I’m not sure audiences know how to respond to these kids not losing for a change.

But, more germane to our discussion, I think the music has a lot to do with it. Most viewers would have known the songs in “Journey” going in, especially the three from the band named in the title, plus “Bohemian Rhapsody.” Whether you like it or not, with “Don’t Stop Believing,” Steve Perry and friends may have written the most epic feel-good anthem of all time (and one that Glee viewers were already familiar with). Juxtaposing the feelings elicited by that song with the kids’ ultimate loss makes for surprisingly powerful television. But Glee‘s got an uphill battle to fight with their original songs, which viewers by default have zero connection to. When choirs compete with Journey and Queen songs for the regional title, many viewers have already invested in the episode. Here, the song selection evokes a giant question mark, and while that doesn’t make it a bad show, it certainly lessens the raw impact behind it.

We won’t be covering the original songs in depth — it’s just not our domain — though I do want to add that a few of the obviously jokey numbers composed by the kids, like “Trouty Lips” and “Big Ass Heart,” provided the best intentional comedy of the episode. (The best unintentional comedy: Kurt’s furtive whisper to Blaine that “oh my God they’re doing original songs!”). The episode still had a few covers, though, so it’s on with the show.

Misery (Maroon 5 cover)
The Dalton Academy Warblers shoulder the bulk of the cover load in “Original Song, ” starting with this episode-opening performance of a 2010 single from Maroon 5. They do a fine job, although their a cappella pop music shtick has become less and less novel as the season has progressed.
BONUS: This song hasn’t made it much past the YouTube crowd yet, but here’s a pretty cool cover from a trio of sisters that has a bit of a “More Than Words” vibe.

Blackbird (The Beatles cover)
Kurt’s (Chris Colfer) performance of “I Want to Hold Your Hand” has given this season of Glee one of its strongest tracks yet, so I was excited to see Colfer get to take on another Beatles track mostly solo. “Blackbird” doesn’t come off quite as well as “Hold Your Hand” did, but Colfer’s a talented singer who sweetly renders this acoustic classic. Additionally, this song provides the episode with its only serious music written more than a couple years ago!
Glee version
BONUS: Get your fill of Beatles covers this month during our Moptop Madness bracket. Vote on today’s matchup and check back every day for new contenders!

Candles (Hey Monday cover)
This song from Florida emo band Hey Monday, released originally in 2008 and again just last month, gives the Dalton Warblers their first regionals number. It features a duet between Blaine (Darren Criss) and Kurt, and also sees the Warblers reclaim their tradition of singing tunes originally delivered by women.
BONUS: Via YouTube, the inverse of the “Misery” video — three teenage dudes give “Candles” a go. Worth it for the hilarious introduction to the video.

Jesus is a Friend of Mine (Sonseed cover)
In order to win regionals, Sue decides that New Directions rival Aural Intensity need to appeal to the religious right with this pandering cover of a bizarre, relatively unknown ’80s song from Christian pop group Sonseed. As you might’ve guessed, Glee plays this one for laughs, and you won’t catch the performance on CD or iTunes. In fact as of this post’s writing the Glee version doesn’t even appear to be online. However, you can at least rest assured that it’s a real song.
BONUS: Because you probably haven’t heard the original before. Far funnier than Glee‘s version.

Raise Your Glass (Pink cover)
The Dalton Warblers close out their regionals set with their take on this 2010 Pink single. Despite myself, I actually really enjoyed this cover; in an episode full of somewhat maudlin tunes, it was nice to see some of the cast cut loose on a high-energy, fun number.
BONUS: If ever a song didn’t need a drum cover video on YouTube, it’s probably “Raise Your Glass.” Yet this video of just such a thing is really quite awesome.

Up next: Glee takes a break! After that — Gwyneth Paltrow comes back, as do Kristen Chenoweth and Stephen Toblowsky. What other guest stars can this season spring on us?

Tune in next month for another set of all-new Glee covers.