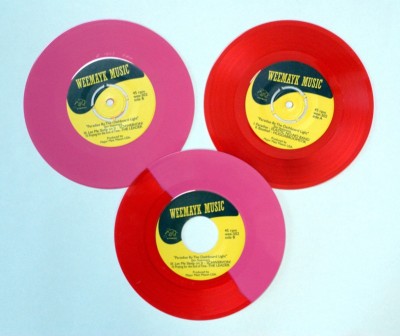 Vinyl is back and with Record Store Day just around the corner, it seemed just the time for another wax giveaway. Today we have three 7” singles for an exciting new multi-band cover of Meatloaf’s classic “Paradise by the Dashboard Light.” Four bands divided up the song into its components and the result is spectacular. We asked project curator and Elastic No-No Band member Justin Remer to tell us how it came together.

I am in the midst of writing a new Elastic No-No Band album, which I want to be a kind of concept record about love and sex. I also was thinking about doing it half-originals/half-covers (maybe split into two distinct “sides” like Todd Rundgren’s Faithful album). When this song came up on my mp3 player’s shuffle, I immediately knew we had to do it for the project. As the song played on and on, I suddenly worried it was going to be almost too much work to try to pull off. But then the idea of an Exquisite Corpse came to me: the song has four distinct parts, so I could get four bands to each take one part without consulting the others and make it their own. So then this became a unique one-off project.

Picking the bands essentially involved me thinking of what New York bands I liked that I thought would fit each part. Elastic No-No Band has such a ’50s/rockabilly inclination already that we were an easy pick for the first part. Huggabroomstik is such a wild and unpredictable band that I just wanted to see what they would do with the short baseball announcer section. Schwervon! is a really fun boy-girl duo whose material already often deals with couples in conflict, so they seemed right for the “Let Me Sleep On It” section. They surprised me a little bit though by subverting the song and switching the singers’ genders, which was awesome. And The Leader is another boy-girl duo with a couple of moody albums to their credit. They surprised me too because I thought they would maybe slow down the ending to better fit their style, but they just rocked it out. The band selection took about 20 minutes, but getting everyone corralled into the studio to record their basic tracks and overdubs, etc., took nearly seven months – which is longer than a lot of albums take to record. The end product totally justifies the effort.

We have three copies of that product to give away: one clear red, one opaque pink, and one red/pink split. Enter your name, email address, and color preference in the comments below to win. Your preference will not affect your chances; we’ll just try to give the winners their desired colors where possible. Winners will be picked randomly one week from today. Contest closed. Check out the tune below.

Thanks to Weemayk Musik and Elastic No-No Band for sponsoring this contest!

32 Responses to “Vinyl Giveaway: “Paradise by the Dashboard Light” Colored 7””