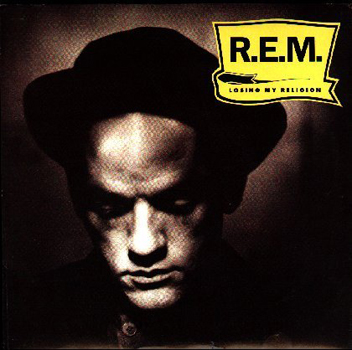 It began as something of a lark. R.E.M. guitarist Peter Buck had just purchased a mandolin and was trying to figure out how to play it. Out of those early practice sessions, which Buck recorded just in case, sprung arguably the most recognizable mandolin riff of all time, as well as R.E.M.’s largest commercial success to date. Though earlier singles like “The One I Love” and “It’s the End of the World as We Know It (And I Feel Fine)” teased at broadening the Athens, GA group’s fan base beyond its original college rock crowd, “Losing My Religion” made the group a national name via copious exposure on pop/rock radio.

Oddly, the most common theme among “Losing My Religion” covers involves imposing on the song a stereotypical dance club beat, complete with thumping bass and driving snare. Apparently, somewhere, nightclubs are filled with people grooving to this song (they’re probably in the corner, in the spotlight). But beyond that strange trend, plenty of cool interpretations of the song exist. Here are a few of them!

1. Besides adding dance beats, another major trend in “Losing My Religion” covers involves intimate performances from female vocalists. The smoothest belongs to California jazz-pop singer Jacqui Naylor, who included this soulful cover on her 2008 album You Don’t Know Jacq. Though the album’s title won’t exactly win any awards, this cover more than makes up for it.

2. Disbanded Swedish trip-hop group Swandive takes R.E.M.’s song to a different kind of club with their chill cover, which augments Michael Stipe’s existential crisis with something that sounds like the famous remix of Suzanne Vega’s “Tom’s Diner.”

3. The television program Rockstar: INXS seems generally loathed, and perhaps with good reason, but fans will rightfully argue that it generated some fairly clever performances. For your consideration: contestant Suzie McNeil, who starts off with a bare-bones cover and ends up with the hardest-rocking arrangement of R.E.M.’s track this side of death metal (more on that below).

4. A little too on-the-nose? Sure, but I can’t bring myself to hate on this performance of the song by a group of Gregorian chanters coincidentally called Gregorian. Weirdly, they choose to add pop instrumentation over an already-fine arrangement, but once you’ve accepted the premise of this recording, such complaints seem superfluous.

5. Finally, how could we forget Tori Amos? She may have the most famous cover of the song: a drastic re-arrangement that captures only a sketch of R.E.M.’s original. More than any other singer on our list, Amos sounds like she’s really lost something here. Though her cover lacks in aesthetic beauty, it conveys the emotion behind Stipe’s lyrics in an extraordinary fashion.

A. Italian black metal band Graveworm asks: what if Cobra Commander sang the verses and Cookie Monster took the chorus?
B. Arizona emo group Scary Kids Scaring Kids wants to know what “Losing My Religion” would sound like if it were the music to a Mega Man level.
C. A legitimately cool bonus: “Losing My Religion” via iPhone app: