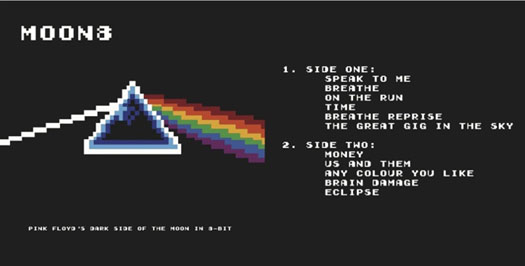 You might have thought three-channel MIDI sequencing was dead, but musician and video game developer Brad Smith’s out to change your mind. Last year he released to the Internet a project in the making since 2006: a complete 8-bit, Nintendo-style rendition of Pink Floyd’s classic 1973 Dark Side of the Moon album entitled MOON8. The reworked tracks totally comply with the NES’ standards; these songs might have found their home on any classic Nintendo cartridge if Roger Waters and David Gilmour hadn’t written them first.

According to his website, Smith’s an accomplished pianist, trombonist and singer in addition to being a gaming professional, making him uniquely suited for a task of this nature. Thus far, Smith says he has no solid plans to sequence another album, although he mentions that if he ever does revisit the concept, Steely Dan’s Aja and Nine Inch Nails’ The Downward Spiral are likely candidates. The notion of hearing a Trent Reznor composition NES-style is pretty exciting, isn’t it? Until then, think about what a Pink Floyd soundtrack might have added to Nintendo sci-fi classics like Galaga or, um, Paperboy…but in Space!

Here’s the 8-bit “Money” with Super Mario Bros.-style coin sound effects. Head to Smith’s website to check out the rest!