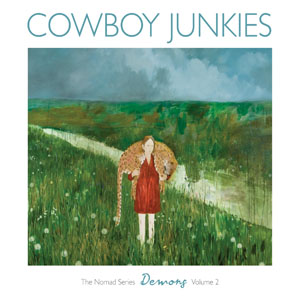 A truly unique voice with an unusual perspective on life, Vic Chesnutt created some of the most fascinating alternative folk music from 1990 until his death by his own hand on Christmas Day of 2009. Paraplegic as the result of a car accident at the age of 18, he received a good deal of acclaim, but little success, continually shuffling between labels and never breaking through to the mainstream. He always garnered the respect of his peers, however – the Sweet Relief Two tribute album of 1996 featured none other than Madonna, R.E.M. and Smashing Pumpkins. Canadian alt-country legends Cowboy Junkies now offer their tribute to Chesnutt in the form of their new album Demons, featuring 11 covers of his songs.

The Junkies built their career on well-chosen and well-crafted covers (you can see our recent feature here) and they continue the tradition nicely in the present album. They open with a raucous take on “Wrong Piano,” originally a slow contemplative ballad from 1995’s Is The Actor Happy. The Junkies reimagine the track with distorted lead guitar and loud “Like A Rolling Stone”-style organ, only bringing it down to allow vocalist Margo Timmins to deliver the verses.

Because of their ethereal, atmospheric style, The Junkies lull you into listening to the music without fully absorbing the lyrics at times, rarely the case with the originals. At times, though, the power of Chesnutt’s words shine through, never so ominously as on 2009’s “Flirted With You All My Life.” Timmins crooning “oh death, now, clearly I’m not ready” becomes much more poignant given Chesnutt’s suicide later that year. Demons, indeed.

The only difficulty with the album is that the pace, at times, can allow your attention to wander. In the second quarter of the album, for example, the band present three similar slow-paced songs, only resolved when they channel Crazy Horse on “Ladle” with chunky rhythm guitar and loud distorted chords on the chorus. Overall, though, their strong, sensitive interpretations of Chesnutt’s at times difficult work should help spread his mantra. Pity he’s not around to reap the rewards.

You can find more Cowboy Junkies on their website.