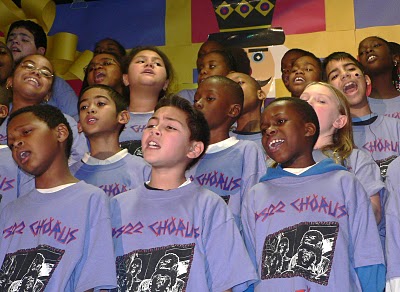 By now you’ve probably seen the video of Anne Hathaway and some Hollywood-types inviting Staten Island’s PS22 Chorus to the Oscars. That video acts as a sure sign, if one was needed, that this mass of fifth graders has “made it.” They’ll be performing the 1939 Judy Garland classic “Over the Rainbow” from The Wizard of Oz at this year’s Academy Awards ceremony, which airs on February 27.

Although they’ve exploded in popularity recently, the kids from PS22 have been owning popular songs since the 2000-2001 school year. We went back through their performance archive (available at ps22chorus.blogspot.com) and picked out our favorites. What’re yours? Let us know below!

1. Come Sail Away (Styx cover)
If ever a song demanded to be sung by a children’s choir, it’s this melodramatic – yet weirdly awesome – Styx ballad about alien abduction. “A gathering of angels” indeed.

2. People Are Strange (The Doors cover)
Sometimes PS22 makes some odd song selections, considering those lyrics are being delivered by a bunch of youth. Pieces like Jim Morrison’s sinister “People Are Strange” take on a new, creepier dimension in this setting.

3. Firework (Katy Perry cover) – with Ithacapella
Collegiate a cappella group Ithacapella perhaps provides a glimpse of what the future holds for these kids in a rousing cover of Katy Perry’s hit. Although over a decade more experienced, the college kids don’t steal the show – instead, they only serve to round out PS22’s already-impressive sound.

4. Throw Your Arms Around Me (Hunters & Collectors cover) – with Crowded House
Australian rockers Crowded House already had a history of covering their countrymen’s 1985 tune when PS22 joined them on stage to perform it in 2008. What results is a beautiful rendition of this song and a true testament to these young people’s ability to stand alongside the pros.

5. If You Want to Sing Out, Sing Out (Cat Stevens cover)
One gets the feeling that this 1971 Cat Stevens composition, performed by the choir with abandon, perfectly encapsulates PS22’s mission statement. May they keep singing.

Don’t forget to check out more from PS22 at their official blog!