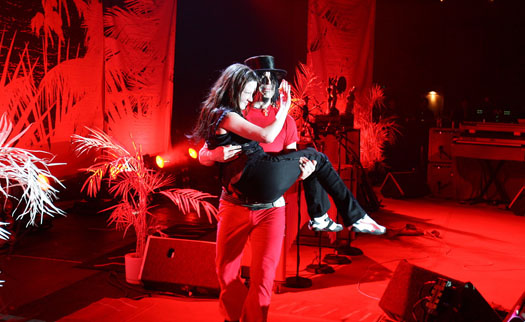 As you have likely heard, the White Stripes officially called it quits today. True, on paper this may not be particularly meaningful; they last preformed regularly in 2007. For everyone who has endured every announcement of a new Jack White project though, hoping it will all come full circle for a reunion with Meg, this announcement proves an ignoble end to four years of hoping.

Needless to say, we’ll be discussing the Stripes quite a bit over the coming days. In our neck of the woods the loss is doubly hard because this pair was a cover lover’s dream. Without a full band to contend with, Jack could perform cover songs on a whim. From their definitive “Jolene” – a performance that has to rank among the best covers of this century – to the impromptu one-offs, they delivered great reinterpretations of blues nuggets, Bob Dylan classics, and the occasional indie nod to Tegan and Sara or the Yeah Yeah Yeahs.

Before we begin all the new content though, we thought it’d be a good time to spotlight our massive White Stripes cover archives. Below we present ten looks back. We won’t be reposting stuff we’ve already discussed, so you’ll have to head to the original posts, linked below. Here are some of our favorites.

• Like “Seven Nation Army”? Silly question; of course you do! We present our five favorite video covers of the breakout hit that united frat boys and soccer moms. Click here.

• If you have a distortion pedal, “Dead Leaves and the Dirty Ground” will help you make the most of it. If you don’t, play along with Leila Broussard’s gentle acoustic cover. Click here.

• The White Stripes’ final performance occurred in 2009 for Conan O’Brien’s Late Night exit (hmm, wonder how that turned out). In 2006, though, they played on the show for an entire week. Covers abounded, including one performed on Conan’s desk! Click here.

• Vermont folkies Strangefolk christened themselves “The Tells” for this live performance of Raconteurs and White Stripes covers. Click here

• White Stripes gone reggae? And on “My Doorbell,” no less? Certainly…interesting. Click here.

• Jack Johnson covering the White Stripes. One Jack too many? Click here.

• Oh yeah, and about that “Jolene” cover… Click here.

• Our King of the Delta Blues Full Album feature included a live take of the Stripes singing Robert Johnson‘s “If I Had Possession Over Judgment Day.” Click here.

• If that’s all the nostalgia you can take, visit our “The Other Side of Jack White” post. Ten covers by Jack, none of which involve Meg. Yeah, we think he’ll be okay. Click here.

One Response to “Looking Back: The White Stripes Cover Archives”