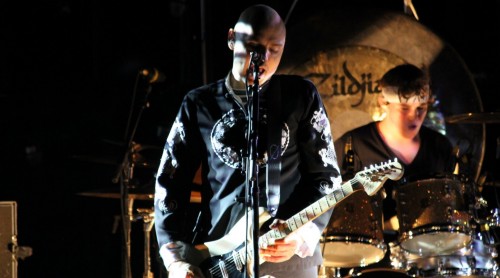 The Pumpkins have celebrated their diverse influences via cover songs throughout their career. A quick scan of their recorded catalog reveals studio takes of tracks originally by acts like the Cars, Van Halen, Alice Cooper, the Cure and Missing Persons. Their live shows are similarly peppered with covers that one might not expect to hear from these iconic slackers. Some of these do seem like a natural fit though: it’s not too hard to draw a line to the Pumpkins from Neil Young, Depeche Mode or Pink Floyd, for instance.

On the other hand, some of these covers take the group into stranger territory. Check out bassist Melissa Auf Der Maur and guitarist James Iha duet on that sublimely cheesy ’80s standard “Don’t You Want Me” by the Human League. The Pumpkins can apparently lighten up a little after all. And then there’s their early take on Blue Öyster Cult‘s fairly ridiculous “Godzilla,” from a 1990 show at Chicago’s Metro. I’m not saying that Nirvana stole their arrangement for ’91’s “Smells Like Teen Spirit” from a Pumpkins cover about a movie monster but…well, listen for yourself.

Any band with a career as storied as the Smashing Pumpkins has racked up a lot of shows. Download our full covers collection below, either as individual files or two mega ZIP files. If we missed any covers, tell us in the comments and we’ll update!

Check out more from the Smashing Pumpkins at their official website!