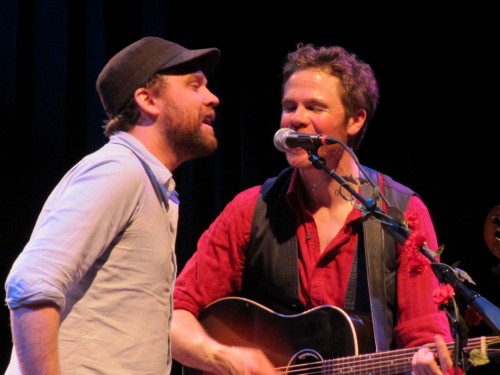 Before he headed out on tour opening for Josh Ritter, Frightened Rabbit’s Scott Hutchison tweeted that he would perform a new cover every night. Ritter stepped up his game accordingly and every performance so far has delivered a few covers for lucky concertgoers. So far Hutchison has performed Prince’s “Purple Rain” and Band of Horses’ “The Funeral,” while Ritter has countered with his full-band version of the Velvet Underground’s “Pale Blue Eyes.”

The nightly highlight is an encore duet through the Everly Brothers’ version of John Sebastian’s “Stories We Could Tell.” Bridging the divide between Idaho and Scotland, the two craft upbeat harmonies that, judging by the crowd reaction, quickly convert the crowd to this relatively obscure tune. Watch videos of the four covers below, then scroll further down to see if you can catch the pair on one of their remaining tour dates.